Plants can recycle it cheap and easy 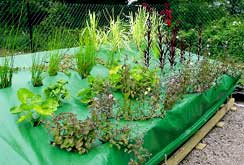 at least half the water consumed at home and the workplace need not be of drinkable quality. With this in mind, a group of researchers from the uk has devised a low-maintenance, self-sustaining method to recycle used water after cleaning it only partially.

The Green Roof Water Recycling System (grow), developed by researchers from Water Works, Imperial College, London and Cranfield University, uses semi-aquatic plants to treat waste washing water, which can then be reused for activities such as flushing the toilet.

grow consists of an inclined framework of interconnected horizontal troughs that can be assembled on the top of a housing block. Planted in these troughs are rows of specially chosen plants. Water that has been used once, such as 'grey water' from washbasins, showers and baths, can be pumped to grow. As the grey water trickles through the system, the plants' roots naturally take up the dissolved pollutants, leaving water that can be used to flush toilets or water the garden.

The semi-aquatic plants used were chosen carefully. The scientists found that water mint was one of the most efficient owing to disinfectant qual