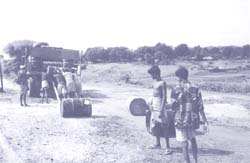 as huge amounts of nuclear waste -- both from nuclear power plants and military installations -- is stored under less than foolproof conditions, the danger of lethal radioactive compounds leaking into the environment is substantial. One of the nightmares of nuclear scientists is the contamination of groundwater sources by radioactive wastes.

At the moment, a chemical analysis of soil samples to test them for radioactive contamination is a time consuming process, making it difficult for prompt and timely action. But now, scientists in the us have developed a detector that can detect uranium contamination quickly and accurately.

The problem with most detectors is that they cannot distinguish between uranium dissolved in water and the other heavy metals (like lead and cadmium) present in the solution. While most of the other heavy metals themselves are also hazardous, uranium contamination calls for special treatment. But the device made by Qin Lu of GeoCenters Inc in Rockville, Maryland, and colleagues at the Naval Research Laboratory in Washington dc can get around this problem. They have developed a molecule that latches onto uranium ions in preference to these other metals, thereby distinguishing uranium contamination form other sorts of pollution.

Since the baskets having the uranyl molecule have a different charge, they can be easily separated by using well known methods like capillary electrophoresis. This involves placing a liquid in a very narrow tube and applying a voltage across the ends of the tube. Charged particles such as ions in the solution are pulled towards one end or the other, at speeds that depend on their charge and size. The researchers have designed a glass microchip for the electrophoresis of uranium solutions. Two intersecting channels are engraved in the glass with cavities at ends to insert the fluid. The electric field separates out the empty and filled calixarenes because of their different sizes and masses.

When the solution arrives at the end, we see two pulses of fluorescent emission excited by a green laser. The pulse corresponding to the uranyl filled basket still appears on time even when the solution has other metal ions. This implies that only the uranyl was captured in the basket. The intensity of the pulse gives an estimate of the amount of contamination.

The pocket-sized device could be calibrated to provide a quick, portable analyser for uranium contamination on site. This could speed up the process of containing the damage substantially ( Chemical Communications , p1913, 2000).