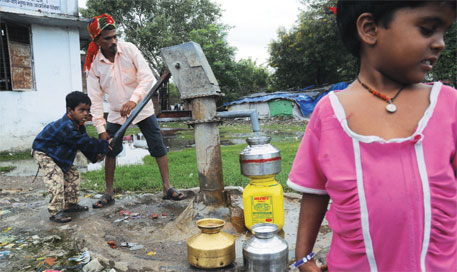 A STUDY by the Indian Institute of Toxicology Research (IITR), Lucknow, has validated what activists have alleged for long: groundwater in the vicinity of the Union Carbide’s pesticide plant in Bhopal is replete with contaminants. The report says groundwater in the area contains high levels of toxins like chlorides, nitrates, lead and alpha-nephthol, a raw material used to make pesticides.

Although the levels of the contaminants are not alarming, the report states that the water is not safe for drinking. This is the first time an official study has confirmed what the Central Pollution Control Board (CPCB) has consistently denied. The study was commissioned by the board itself under pressure due to public opposition and Supreme Court orders to validate a contentious and inconclusive 2010 study by Nagpur-based National Environment Engineering Research Institute (NEERI). The apex court is hearing a petition filed in 1995 by activists concerned about the drinking water quality in the area.

“The report vindicates our stand to secure clean drinking water in areas affected by abandoned toxic waste from Union Carbide,” says Rachna Dhingra, one of the petitioners from non-profit Bhopal Group for Information and Action. But she cautions that the study is problematic as it also follows the methodology used in the NEERI report. 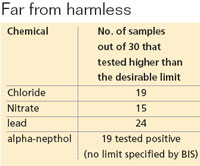 Same is the case with nitrate levels. In 15 samples, nitrate levels were much above the desirable limit of 45 mg per litre. The concentration of lead was also much higher than the permissible limit in 24 samples. Nineteen samples tested positive for alpha-nephthol, used to prepare the pesticides aldicarb and carbyl. Mercury analysis was not complete at the time of the report submission.

CPCB has repeatedly denied that the factory is responsible for water contamination, saying the soil on which it is built is clayey and contaminants cannot leach through it. Vinod Babu, head of the hazardous waste division at the board, says, “The report shows the basic contaminants are nitrates and chlorides. This indicates sewage seepage into the groundwater and not necessarily chemicals from the Union Carbide factory.” He adds that the high amount of lead in the samples is also not from the factory but is a regular geological feature of the area.

The claim is puzzling. Independent studies on soil and water around the pesticide factory by Greenpeace in 1999 and the Madhya Pradesh Pollution Control Board in 2002-03 had also found contamination in the groundwater near the factory. In 2009, researchers from Delhi based non-profit Centre for Science and Environment (CSE), accompanied by CPCB officials, conducted studies on contamination of groundwater and soil in the area and drew similar conclusions. The findings were ratified by the officials at that time. But the board refuses to accept this in the court now. Ramakant Sahu, a scientist working with CSE, says the presence of alpha-nepthol is a dead giveaway that the source of contamination is Union Carbide plant.

Meanwhile, the Supreme Court has asked CPCB to conduct another round of sampling in October, heeding the advice of advocate Karuna Nundy, who represents the petitioners. Nundy pointed out that the samples collected during the monsoons could have been diluted and the actual concentrations of the toxins in groundwater might be more.