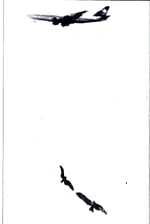 The plans of the International Airports Authority of India (IAAI) to use trained falcons to scare away birds that pose a risk to aircraft near airports has run into rough weather. IAAI's move, based on a similar experiment conducted successfully at Heathrow a couple of years ago, seems to be oblivious of the fact that the falcon is an endangered species.

At present, IAAI depends heavily on its mobile sharpshooter squad to drive birds away. However, IAAI sources explain that in the past few years, the squad proved to be increasingly ineffective and so the idea of using falcons was conceived.

Now, IAAI has discovered that falcon trainers are a rare breed. The ancient art of falconry was dealt a death blow when the bird was listed as endangered and the possession of falcons was made an offence. IAAI would have to obtain a special permit to use falcons.

"There are many constraints in using falcons, which are prey-specific and cannot be used in bad weather or at night," says S M Satheesan of the Bombay Natural History Society (BNHS), which has surveyed airfields for the past decade to try and tackle the problem. BNHS recommends that instead of using falcons, environmental control measures such as removal of garbage and vegetable and animal food from the vicinity, should be implemented.