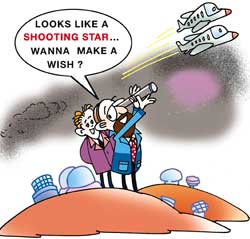 Pollution from aircrafts might just cloud over ground astronomy in a few years to come. Ground-based astronomy could be completely shut down within 40 years because of increased cloud cover from pollution from aircraft exhaust trails and climate change, says Gerry Gilmore from Cambridge's Institute of Astronomy. Aircraft condensation trails, popularly known as contrails, can disperse, becoming indistinguishable from other clouds. And the threat looms larger with the current trend of increasingly cheaper air travel all over the world.

The hypothesis is based on extrapolating air traffic growth figures. The calculations were made as part of preparations for an upcoming observatory project called the Extremely Large Telescope (elt). This telescope is intended to locate planets around nearby stars and look for extremely faint objects in the neighbourhood. The rate at which the contrails are expanding in terms of their fractional cover of the stratosphere is so large that if predictions are right, then we have just 40 years more.

"Already, around the major observatories, there are local laws to prevent airplanes flying within quite large distances," Gilmore told the bbc news website. He added that sites where observatories are located, such as the Canary Islands, Hawaii and South America, are also attractive holiday destinations, and likely centres for increased air traffic.

He added that the projections did not factor in the effects of global warming, which are likely to exacerbate the problem in some time.

There are several concepts under consideration for the European elt, but the preferred design seems to be converging on a telescope that is about 30-60 metres in diameter.

Although a location has not been decided yet, but, despite the difficulties of access, Antarctica might become an option. The frigid area has relatively clear skies, with a climate that is somewhat different from other continents, and, more crucially, is free from over-flying commercial jets.

Gilmore adds, "You either give up your cheap trips to Majorca, or you give up astronomy. You can't do both.