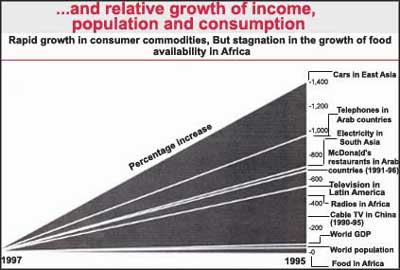 Current economic growth patterns: the rich get richer, the poor get poorer. Take a look at the patterns of consumption between 1975 and 1995. The world's richest people - only 20 per cent of the population - accounted for 86 per cent of the total private consumption expenditure. While McDonald's restaurants in Arab states grew at a rate of about 700 per cent, food availability in Africa remained the same. The United Nations Development Programme's Human Development Report 1998 questions the present patterns of consumption in terms of human satisfaction. At present rates, the meek shall inherit a very small portion of the Earth.