IN 1973, Gujarat became the first state to introduce legislation that restricted farmers from extracting groundwater. For a water-stressed state the Groundwater Conservation Bill was godsend, said water experts. But the then chief minister, Chimanbhai Patel, refused to sign the bill fearing its impact on the state’s 0.3 million farmers.

Forty years later on February 27, the Gujarat government, led by Chief Minister Narendra Modi, passed a bill which drew the ire of his opponents in the light of growing industrialisation. If implemented, the bill would require farmers to get licence to draw groundwater exceeding the prescribed depth (45 metres). As per the bill, all the 5.5 million farmers in the state have to declare their source of irrigation water.

The Irrigation and Drainage Bill of 2013 seeks to replace and repeal the existing Gujarat Irrigation Act of 1879. It proposes appointment of canal officers who would have the power to detain farmers violating the rules. It prescribes provisions to monitor irrigation schemes, water distribution, set up and maintain water-gauges. The bill makes it mandatory for a farmer to apply for a licence from the canal officer of his area if he wants to construct a tubewell or borewell or an artesian well, exceeding the depth of 45 metres. It also seeks to charge farmers for irrigation water reaching cultivated land within 200 metres of a canal either by percolation or leakage, surface flow or by means of a well-sunk from the canal.

The bill proposes penal action against “errant” farmers, including imprisonment up to six months or fine to the extent of Rs 10,000. 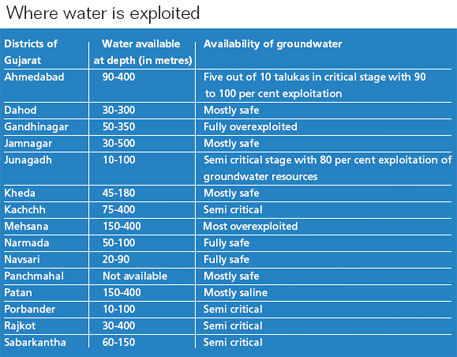 “The bill is meant for equitable distribution of water resources,” says state water resources minister Babubhai Bokhiria. But leaders from the opposition, mainly the Congress and the Gujarat Parivartan Party, have cha