Guns are too large 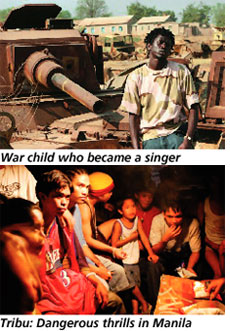 The bruising treatment of youngsters in many parts of the world, and the use of child soldiers in war-torn parts of Africa emerged as a recurring theme at the 10-day Berlin International Film Festival that concluded on February 17. War Child, a documentary by first-time German director Christian Karim Chrobog received much acclaim. It relates the story of singer Emmanuel Jal who, in the space of a decade, made a remarkable transition from child soldier in Sudan to international hip-hop musician. Jal, now 28, was seven when his mother was killed. He was hauled off for military training by Sudanese Liberation Army forces in the late 1980s, and given an AK47 taller than himself.

Chrobog tells how the shy Jal was later adopted by a British aid worker and smuggled out to Kenya.

Another movie well received at Berlin was Tribu (Tribe) by Philippines director Jim Libiran. The film is set in Tondo, a notorious district in Manila where youth gangs parade the streets at night in search of quick fixes and dangerous thrills. The festival showcased 21 movies from 19 countries.