The provisional figures for India's forest cover are now ready, and Down To Earth has managed to acquire a copy. The figures, when compared to earlier ones, show an overall increase of 236, 800 hectares of forest. But is that really so? 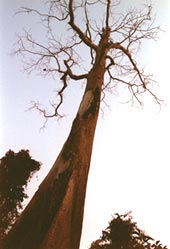 The provisional figures for India's forest cover are now ready, and Down To Earth has managed to acquire a copy. (see table: Change in forest cover) The figures, when compared to earlier ones, show an overall increase of 236, 800 ha of forest. Is that really so?

Every two years, the Dehradun-based Forest Survey of India (fsi) generates satellite-based mapping of the country's forest resources. Each time it does so, the report becomes a festive occasion: the government can celebrate an increase in forest cover. But a small collective of bemused observers watches as this bi-ennial circus unfolds. Repeatedly, they have to remind the celebrants that it is only statistics -- used deftly, interpreted with care. Forest cover is only about political mileage.
How the report is finalised is a hush-hush affair. Says a ministry of environment and forests (moef) official, "The report gets fine-tuned till the very last moment; at times one cannot divulge the figures before the report is officially released." Moreover, as Subhash Ashutosh, deputy director of fsi, says, "We have increased the mapping resolutions in this assessment, so this data cannot be compared directly with the previous state of forests reports. Earlier, mapping was done at a scale of 1: 250,000. Now it has been conducted at 1:50,000. So a simple deduction based on earlier reports is not feasible." What does this mean? "Obviously, this fine print shall be lost on the politicians," glosses a gis expert. "They shall pick up the raw data and extrapolate. They will not qualify that much of the so called increase in forest cover is due to better mapping techniques."

Increased resolution is not handy to states like Assam, which loses more than 40,000 hectares of dense and open forest. Such dramatic loss has been documented in other studies as well. A gis mapping study by S P S Kushwaha, head of the ecology and forests division of the Indian Institute of Remote Sensing, Dehradun, shows that Sonitpur district in Assam has alone lost more than 20,000 ha of forest. States like Maharashtra and Madhya Pradesh have undergone dramatic changes; this, too, must be understood in terms of new technology. "How can Maharshtra suddenly gain more than 300,000 ha of dense forest and Madhya Pradesh lose more than 100,000 ha of dense forest in two years?" asks a senior gis scientist. "If you see growth or patterns of increase over the last few reports, the current figures should fit in the trend. Nothing dramatic has been done in the last two years by the government to record a leap in forest cover."

Does technical efficiency, then, render comparison completely odious? Not necessarily, say some experts. The two sets of information can be merged. "Using existing mapping technologies and digital processing and computations it is easily possible to factor in the levels of error that earlier broader scale mapping may have caused and compare data," says one.


Improved resolution may have wrought some confusion, but reports have hardly ever been squeaky clean. "Political interests and internal bureaucratic pressures ensure that things that should be reported on get left out or lost in the data," says one forest official involved with the yet unpublished report. C K Varshney of the School of environmental studies, Jawaharlal Nehru University, Delhi, says, "At one point the fsi may have lacked the technology to distinguish between plantations and natural forests but now it is surely possible. It is a tedious task, to begin with perhaps small areas should be mapped for this."

Varshney refers to a raging debate about 'improved' forests: is it a result of more plantations, or more natural forests? The Food and Agriculture Organisation's Forest Resources Report, 2000, mentions that "Plantations account for almost half of India's forests. There is currently a small annual loss of forest cover from natural forests, more than compensated by annual plantation establishment. fsi (1999) reports the total area of forest plantations in 1997 as 27.463 million ha. "Natural forests are ecologically completely different from plantations," explains Varshney. "India has a history of monoculture plantations. Increase in plantation areas cannot be mistaken as compensation for loss of natural forests. The fsi must start showing them separately at state levels and not show the state forest covers as aggregates of the two." Adds Qamar Kureishi, faculty at the Wildlife Institute of India, "For an ecological audit it is important to have both the values separately. A clubbed figure can be referred to as tree cover, but not forest cover."

More precise satellite imagery has ensured that even small plantations or orchards outside forest areas have been mapped. But it is not known if the final report shows them separately, or clubs them with overall forest cover. This would not signify any real ecological improvement; only allow the government to claim a pyrrhic victory. J K Rawat, fsi director, says, "It is not only about technology but also other factors that come into play when we try to go in for such a mapping. Manpower and time being two of them." But as a senior forest officer says off the record, "As usual, we like to believe it is the technology that restricts us. Truth is its political compulsions that inhibit use of technology. Which government would want to accept that natural forests got cut during its tenure? Yet one records thousands of cases of felling across the country, when the forest department goes asking for more funds. Start now with the new method of mapping and in few years time we can work towards ground-toothing the entire country."

An important issue is the classification of forests into dense forest, open forest and scrubland. Any forest with a canopy cover of more than 40 per cent is considered as dense forest. Which means any change in dense forest canopy is not detected. Say, a dense forest with more than 55 per cent canopy cover loses 10 per cent of canopy. It will continue to be recorded as dense forest. "In other words, one could cut away nearly one fifth of the forest and it still could go undetected," the same senior scientist points out. "We should ideally have four categories. One for more than 70 per cent canopy cover, one between 70 and 40, one between 40 and 10 and the last below 10 per cent cover. Some scientists have asked for finer classifications but the forest department believes it will not help in forest management." The problem here is not juggling numbers, but how to beat the forest bureaucracy mindset that prevents any healthy discussion on survey methodologies. "There has been an independent audit this time of the mapping done by the fsi team," says Ashutosh. While this is surely the right move, what the forest bureaucracy really needs is an audit of what all parameters and factors fsi report ignores while mapping.