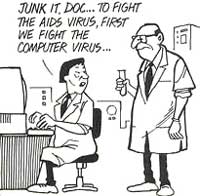 A SERIOUS error acknowledged recently by AIDS researchers at USA's prestigious Harvard Medical School is being cited as an example of what can happen when scientists rush into clinical trials pleading that the urgency of their work excuses corner-cutting.

In the Harvard incident, field trials were held nationally, based on research carried out primarily by medical student Yung-kang Chow. A report of the research was published early this year in Nature, the British scientific journal. Now, Harvard scientist Martin S Hirsch, who is supervising the research, concedes that had Chow's more experienced co-authors been more circumspect they would have repeated crucial steps in his research and detected misreading of data relating to a mutation of the AIDS-causing virus, HIV.

As a result of this error, scientists have had to junk the data offered to support the Harvard team's theory that using a three-drug combination can halt replication of the HIV virus.