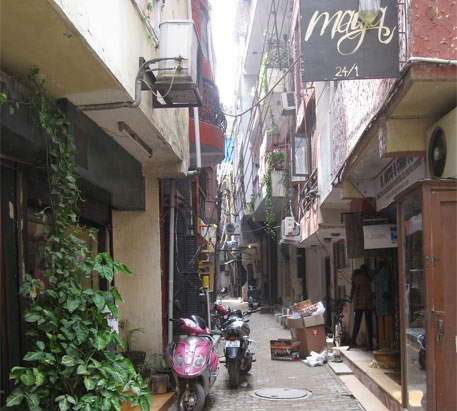 A number of high-end restaurants and eateries in Delhi’s Hauz Khas village, nestled amid posh colonies of south Delhi, are under the scanner of the National Green Tribunal (NGT) and South Delhi Municipal Corporation (SDMC) for discharging untreated waste into sewers. During a recent inspection, SDMC found that eight out of 34 restaurants in the area are operating without any of the clearance mandated by a Delhi High Court order of May 2013.

According to guidelines issued by Delhi Pollution Control Committee, which monitors pollution in the national capital, these establishments need to set up common effluent treatment plants (CETPs) along with oil and grease traps. In September, restaurants not abiding by these rules were issued show-cause notices by DPCC. This was followed by NGT’s order to shut them down for three days. Twenty six of these restaurants were allowed to open after their owners appeared before the tribunal. The green tribunal then granted four weeks, starting September 22, to these 26 restaurants to install effluent treatment plants and get various other mandatory clearances.

According to Mukesh Yadav, spokesperson of SDMC, these restaurants do not have any fire safety or liquor permits and it is yet to be ascertained if these eight restaurants even have mandatory health department certificates.

Hauz Khaz village houses several high-end boutiques and eateries. Pankaj Sharma, former resident of the village and head of a non profit Centre for Transforming India, had filed a petition before the NGT in July this year, highlighting the absence of sewage disposal and severe air pollution caused by power generators. During July and August, DPCC officials found that only one restaurant in the area was following the rules.

Sources in SDMC have also said that about 10 buildings in the area have been housing illegally constructed restaurants. On October 19, SDMC and Delhi Police will submit all their findings to the Delhi High Court. The high court is also hearing a petition on Hauz Khas village and had asked the two government agencies to submit a report.

DPCC officials told Down To Earth that they have been ordered by NGT to inspect 20,000 odd restaurants, pubs, bars and discotheques operating in the national capital. “This crackdown might take some time as we are short of staff but this is definitely a start,” said DPCC member secretary, Sandeep Kumar Mishra. DPCC has now roped in hotel and restaurant owners’ associations to create awareness among such establishments in Delhi and has also suggested that the restaurants could set up decentralised wastewater recycling systems to contain the problem.

Many eatery owners also say that it is not easy for them to set up these sewage plants and a few have also demanded a common effluent treatment plant for their restaurants. D K Singh, senior scientist with DPCC says, “Each of these restaurants has to get a customised effluent treatment plant for which they need much bigger space. But where there is a will, there is a way.” He adds that setting up CETPs is not easy as getting land allotted for treatment plants is difficult. But, even if they set up a CETP, the residents will complain of foul smell.

Unchecked effluent discharge
Sharma, in his petition, has listed 33 restaurants which have been violating various norms under the Environmental Protection Act and Air and Water Pollution Act.

For many, DPCC guidelines on effluent treatment plants are confusing. “We are installing an oil and grease trap but we still do not know if we have space for an effluent treatment plant,” says a restaurateur from the village. S S Sarna of Hauz Khas Traders Association, owner of Kaffiene, one of the restaurants which received a show-cause notice, says that DPCC should have suggested solutions after understanding these constraints.

Unchecked mushrooming of such restaurants and pubs is another challenge for the bodies monitoring waste disposal. Environment engineer Mohammad Aziz told NGT that one restaurant owner had denied running a bar and claimed that he was only a resident there.

A few residents say that keeping a track of pubs and discotheques is difficult as they open and shut frequently in the village. “After DPCC visited the site, three new restaurants came up in the area within a fortnight. We still do not know if they have any sewage treatment systems in place,” says the petitioner.  According to him, Hotels and Restaurant Association (HRA), a pan-India body of hotels and restaurants, has clearly laid down the guidelines on its website. When most hotels and restaurants in other parts of the country are well-versed with these rules, the ignorance of restaurateurs in Hauz Khas is only an excuse.

Unchecked development
The problem in Hauz Khas village is not restricted to waste disposal. It runs much deeper as encroachment and illegal construction is another menace. Sharma has alleged that these restaurants have encroached upon forest land and now dump their waste in the Archaeological Survey of India (ASI) protected lake in the area.

In a separate petition filed at Delhi High Court, Pankaj Sharma had asserted that many house owners in Lal Dora (land which is part of the village habitation), have illegally constructed three to four floors in the name of renovation.  According to SDMC, since the notification of master plan of Delhi 2021, released in 2007, no new constructions have been allowed in the Lal Dora areas. However, when Delhi High Court summoned SDMC, its officials admitted they have not been able to keep tabs on illegal constructions in the village and close to the Hauz Khas monuments.

In November, there is another hearing of the case for the illegal construction within the village. “One good aspect that has emerged from the litigation is that the hotel and restaurant owners are now aware that they have to abide by the rules if they want to continue with their businesses.