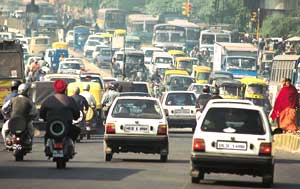 the air around us is toxic, full of toxins that cause cancers, along with other serious ailments. The magnitude of air toxics is alarming, especially those emitted by vehicles. These are greater cause for concern because they are inadequately monitored.

A recent study, Smoke Screen: Ambient Air Quality in India , by the Community Environmental Monitoring, a Chennai-based people's movement, reported that air toxics in ambient air, on an average, exceeded the us Environmental Protection Agency (usepa) Region 6 screening levels by a factor of 1,174-32,000. Screening levels, calculated for residential exposure, are based on a one-in-a-million cancer risk or a 'hazard quotient' of one for non-cancer effects.

We normally associate conventional pollutants like particulate matter (pm), oxides of nitrogen, hydrocarbons and carbon monoxide with vehicles. But benzene, acetaldehyde, 1,3-butadiene, polycyclic aromatic hydrocarbons (pahs), and formaldehyde are among the other pollutants that also emanate from vehicles and are classified as mobile source air toxics by usepa (see table: Poisonous mobile matter). They are emitted from a variety of sources (see box: Errors of emission) but with the ever-growing number of vehicles on road, there needs to be an increasing check on such toxics.

Over the years, emission norms for vehicles have been tightened. India also has ambient air quality standards for conventional pollutants emitted from vehicles. But there is no regulation for mobile source air toxics. Nor are there any standards set or strategies to control them. Says a senior official from the Central Pollution Control Board (cpcb): "I don't think the problem is either money or technical expertise. Manpower is the biggest hurdle in measuring these toxics." Delhi is an exception where benzene, toluene, xylene, benzene soluble organic fraction and pahs are measured, but not as regularly as conventional pollutants. 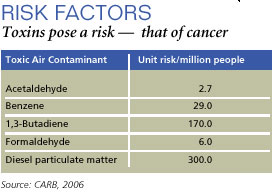 The risks that these toxic pollutants pose are measured in terms of unit risks. Unit risk represents the number of excess cancer cases per million people per microgramme per cubic metre (g/m 3) toxic air contaminant concentration over a 70-year lifetime exposure. For instance, if the level of diesel particulate matter in ambient air is 3 g/m 3, it is associated with a health risk of 900 (3 g/m 3 by unit risk factor of 300; see table: Risk factors) excess cancer cases per million people.

usepa in February 2006 said benzene is the most significant air toxic, which contributed to 25 per cent of the average individual cancer risk. Benzene is a human genotoxic carcinogen. Current data shows that there would be around 4,000 additional cancer cases in Delhi over a lifetime's exposure (see graph: Benzene battle) to benzene. S K Tyagi, scientist, cpcb, says: "The present benzene levels in Delhi, though high, have decreased considerably. 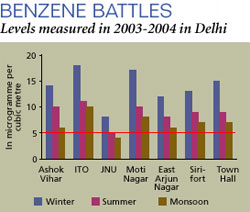 However, this doesn't mean that we should be complacent." Some of the benzene in the fuel is emitted from vehicles as unburned fuel. Presently, the benzene content in petrol in India is at a staggering3 per cent by volume (except for the 11 cities that have Euro iii standards). The roadmap, which aims to bring down levels to 1 per cent by 2010 in the rest of the country, is yet to be approved by the government.

In 2002, an expert working group was constituted in India to propose ambient air quality standards for benzene and benzo(a)pyrene for 2005 and 2010. The group suggested a standard of 10 g/m3 for benzene and 5 nano gram per m3 (ng/m3) for benzo(a)pyrene in 2005 to be successively reduced to 5 g/m3 and 1 ng/m3 in 2010. But the standards are yet to be notified. A European Commission directive of November 2000 has already set the limit values for benzene at 5 g/m3 to be achieved by January 1, 2010.

The same is the case with pahs. who has already added pahs to its list of priority pollutants in air and water. France, Japan, Germany, the Netherlands, Sweden and Switzerland have also prescribed emission standards for most air toxics including pahs. Various studies conducted in India show very high levels of pahs in cities.


A solution needs to be found to this rapidly growing problem. Experts say that an air toxic monitoring infrastructure should be created and then, based on observation, strategies should be developed to control them. We have not even taken the first step yet.

The Clean Air Act of the us does not require a national air toxics monitoring network, but usepa has recently established 23 national sites to assess ambient air toxic trends, and states and local agencies have established over 300 monitoring stations nationwide. usepa also has an ongoing evaluation of air toxics under the National Air Toxics Assessment -- designed to help the agency, states, local and tribal governments. It focuses on a single year and includes, among other things, an inventory of emissions and annual average outdoor air toxic concentrations.

There could be a ray of hope for change in India though. The Union ministry of environment and forests has said recently: "National Trace Organic Laboratories (are) being set-up in cpcb, consisting of state-of-the-art laboratories which will monitor air toxics."