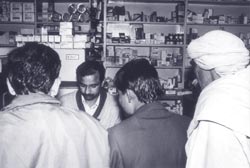 after nearly two years of negotiations, poor countries will finally have access to cheaper medicines following a deal clinched at the World Trade Organization (wto) in Geneva, Switzerland, on August 30, 2003. The agreement was aimed at establishing the modalities of how countries without domestic pharmaceutical manufacturing capacity or with inadequate facilities could access cheaper generic versions of patented drugs during a public health crisis. Some critics, however, fear that the conditions stipulated for the intended beneficiaries are too burdensome and potentially discouraging.

During the final days of negotiations, a statement issued by the chairperson of the General Council -- the highest decision-making body of the wto -- sparked a row. The statement was made in an attempt to clarify the shared understanding of members with regard to a paragraph of the Doha Declaration on Trade Related Aspects of Intellectual Property Rights (trips) agreement and Public Health (See: 'Calling the shots', June 30, 2003). All members, barring the us, agreed to a draft decision on the implementation of the paragraph on December 16, 2002.

The paragraph relates to the mandate in the declaration that required the trips Council to find a solution to the problem faced by poor countries in accessing cheaper drugs during emergencies. The need for a statement arose from the lack of trust between the us and some developing countries such as India and Brazil. The us feared that these countries might misuse the system for commercial gains.

The final statement specifies that the instrument would not be used to pursue commercial policy objectives. It adds that the products supplied under this facility would not be diverted from the countries they are intended for. In this context, countries have been encouraged to use procedures such as special labelling, colouring, shaping, sizing, etc. The statement also spells out how issues arising from the use of the system may sought to be resolved, and lists the countries which have opted not to use the mechanism. These nations are all from the developed world.

Non-governmental organisations (ngos) such as Oxfam and Mdecins Sans Frontires (msf)), which are fighting to provide cheaper medicines to poor countries, fear that the draft decision itself will not provide a workable solution. "The burdensome system being put in place does nothing to ensure that generic production will happen in the future," argues Cline Chaveriat of Oxfam. Other ngos contend that while the new agreement only has modest benefits, it has substantial costs, risks and uncertainties.

"The wto will now, as a matter of expected practice, oversee the use of compulsory licensing in the most intimate terms," states a press release issued by Consumer Project on Technology, an ngo working in the area of iprs and healthcare. The wto will look at the terms of individual licences and evaluate how insufficient manufacturing capacity was ascertained.