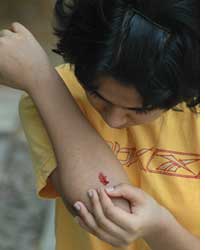 not many people know it by its real name. They are familiar with it as the bleaching agent in fairness products or as an antiseptic. But hydrogen peroxide is not our invention for treating wounds. Our bodies use it to marshal white blood cells to injured tissues.

Until now it was believed that white blood cells produce hydrogen peroxide at the wound site to kill bacteria. In recent experiments on zebrafish, biologists and oncologists from Harvard Medical School and Dana Farber Cancer Institute in the US found that wounds themselves release hydrogen peroxide. White blood cells respond to this chemical signal, crawl to the wound and start cleaning it. The team discovered it accidentally while studying a molecule called reactive oxygen species. Hydrogen peroxide is one of them.

Philipp Niethammer and Clemmens Grabber, post-doctoral researchers in Harvard Medical School and Dana Farber Cancer Institute respectively, inserted a gene engineered to change colour in the presence of hydrogen peroxide, into zebrafish embryos. They inflicted a wound on the fish. As they peered through the microscope they were surprised to see that hydrogen peroxide appeared immediately at the wound site, prior to the arrival of white blood cells.

They repeated the experiment with a zebrafish in which they had disabled a protein responsible for producing hydrogen peroxide. Not only did hydrogen peroxide not appear, white blood cells also failed to respond to the injury.

The study, published in June 4 issue of Nature, proved that white blood cells needed hydrogen peroxide to sense the wound and move towards it.

The human body, too, might be using hydrogen peroxide as an envoy that marshals troops of white blood cells to wounded tissues, said the researchers. Neutralizing the chemical can become a key to treating asthma patients who have high levels of white blood cells in lungs. "Perhaps in conditions like asthma, the lung epithelia (the outer layer of tissues) is producing too much hydrogen peroxide because it is chronically irritated, which, if our findings translate to humans, would explain inappropriate levels of white blood cells," said Timothy Mitchison, professor of systems biology at Harvard Medical School. "Our research may enable us to develop new anti-inflammatory drugs," said Niethammer.