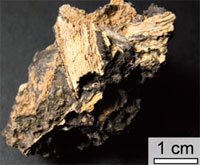 Fragments of leaves and organic matter belonging to prehistoric periods have been found in Argentina. The fragments are trapped inside glass which was formed 6,000-9,000 million years ago when asteroids crashed on Earth. Soils in eastern Argentina are dotted with such impact glass and one of these impacts, around 3 million years ago, coincides with the disappearance of 35 animal genera. Such glass pieces could not only give a snapshot of life on Earth, the find suggests that similar impact glass might be present on planets like Mars and could hold clues about life on the planet. Geology, April 15 (online)

ASTROBIOLOGY
Vitamin from outer space
Vitamin B3 could be of extraterrestrial origin. The vitamin, which helps in the production of nicotinamide adenine dinucleotide (essential for metabolism), has been found to be present in several meteorites. This indicates that the origin of life might have been assisted by crucial molecules which came from space. A study analysed eight different carbon rich meteorites and found B3 present in all of them in proportions ranging from 30 parts per billion to 600 parts per billion. Geochimica et Cosmochimica Acta, April 13 (online) 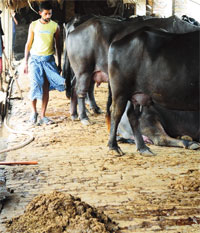 Manure from dairy animals is commonly used as fertiliser. But it has now emerged that manure from farm animals has a diverse set of antibiotic resistance genes that are passed into it from the animal’s gut. Use of manure as fertiliser transfers these gene-carrying bacteria to the soil from where they can be released into the environment. Such genes could get transferred to humans in two ways—through their host bacteria colonising humans or through the host bacteria infecting other bacteria that colonise humans. In either scenario, animal dung could cause antibiotic resistance in humans. This raises the need for active surveillance of such bacteria. mBio, April 22

The genetic profile of the rainbow trout has been mapped and could give clues to the evolution of vertebrates. The fish underwent a rare genome doubling event around a 100 million years ago. The evolutionary impacts of such doubling events are lost in future generations of the species. But 100 million years is not a very long time in genetic terms and hence the fish’s genome could give data on the evolutionary process of vertebrates. Nature Communications, April 22

HEALTH SCIENCE
Chew on this

If you want your kids to be well-mannered, serve them food cut into bite-sized pieces. A study on 12 children aged 6-10 years has found that kids who bite into food using their front teeth are half as obedient to adults and twice as aggressive towards other kids than those children who eat food cut into chewable pieces. In the study, the children were divided into two groups, with one being served chicken on the bone and the other in bite-sized pieces. The groups were asked to stay inside a nine-foot-radius. The test was then conducted with the conditions reversed for the two groups. In both the cases, children who bit into their food were found more likely to move out of the circle or indulge in disorderly activities. Eating Behaviors, April 1 (online)

Nearly two-thirds of energy produced through fossil fuel combustion or in coal plants gets wasted as heat. This waste could be reduced. A new material, tin selenide, has been created to help convert heat energy into electrical. Being the most poor conductor of heat known so far, tin selenide is the most efficient material for this purpose. It also has good electrical conductivity. These properties make it very useful for thermoelectric devices, automobile industry and refineries. Nature, April 16 (online)

Muscle fatigue is a common symptom associated with regular alcohol consumption. This happens because alcohol reduces Mfn1, a protein, by as much as 50 per cent in the body. Mfn1 helps in mitochondria fusion, a process necessary for repairing damaged mitochondria.

As mitochondria are the cell organelle responsible for producing energy, the fall in Mfn1 and in mitochondria fusion cause muscle fatigue. The Journal of Cell Biology, April 21 (online) 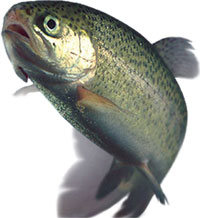 Prescription drugs people take end up in rivers and estuaries without fully breaking down. It has been found that the presence of such drugs, even in minuscule amounts, in water bodies has a drastic impact on marine animals. Fish exposed to varying levels of fluoxetine, a common antidepressant, for four weeks exhibited aggression towards females, injuring them. At the highest levels of concentration of the drug, the survival rate of females was 77 per cent to 87.5 per cent, and the fish which died had bruises and tissue damage. However, the behavioural change is reversible and the tests are not applicable to humans. Aquatic Toxicology, June 2014 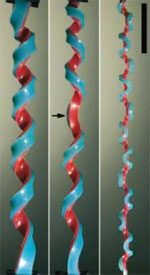 A new three-dimensional shape, hemihelix, has been discovered. The discovery, which was made during a project to create two dimensional springs, made researchers wonder if the shape got created randomly or were their factors which control its formation.

Using rubber strips and numerical simulations, it was found that there is a critical value of the difference in the width to height ratio of the rubber strips beyond which they took hemihelixical shape.

Being able to reproduce the shape at the molecular level could lead to advancements in several nano devices.PLoS One, April 23

Data sent from a NASA satellite is being used to assess UV-B radiation on Earth. UV-B is one of the three types of ultraviolet light, having a wavelength 290 nm to 320 nm. The satellite has been orbiting Earth since 2004 at an altitude of over 700 km. It sends data daily which is processed through a computer algorithm to calculate long-term averages. The processed data available for 2004-2013 can be used for macro-ecological analyses of the impact of UV-B radiation on organisms. It shows that countries in the southern hemisphere receive 50 per cent higher UV-B radiation than countries in the northern hemisphere. The data can be used to devise area-specific strategies for protecting UV sensitive material and to study the prevalence of skin diseases. Methods in Ecology and Evolution, April 2014