Decision on Covaxin in 4-6 weeks, says WHO chief scientist at DTE webinar 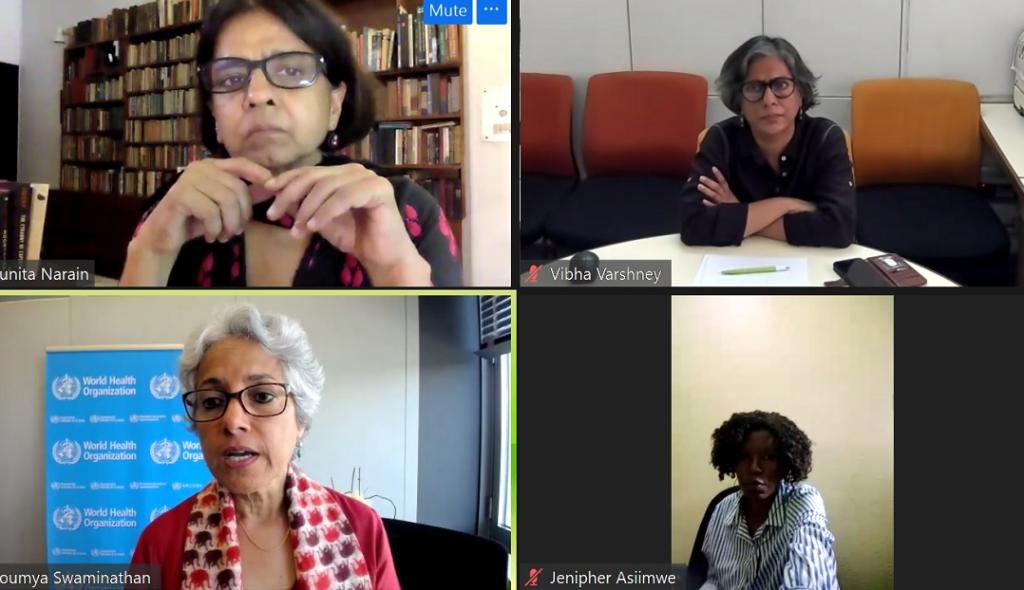 Sowmya Swaminathan speaking at the CSE-DTE webinar on July 9, 2021

The World Health Organization (WHO) will take a decision on the inclusion or exclusion of Covaxin in its emergency use listing (EUL) of novel coronavirus disease (COVID-19) vaccines in four-six weeks, the organisation’s chief scientist Soumya Swaminathan said in a Down To Earth webinar July 9, 2021.

Swaminathan said Bharat Biotech International Ltd had already submitted Covaxin’s full data and the WHO regulatory panel was looking into it. She added that it was wrong to think that the UN health body ‘picks and chooses’ vaccines for EUL listing as there is a certain procedure involved in approving them.

Swaminathan also said it was yet not clear if everybody would really require booster doses of COVID-19 vaccines. This, she said in the backdrop of Pfizer Inc and BioNTech SE’s announcement that they were going to apply for a United States Food and Drug Administration approval for them.

“The science is evolving,” Swaminathan said, adding there was not enough data as to when — after one, two or three years — people would be actually needing boosters.

The data emerging from follow-up studies of fully vaccinated people by now clearly shows that immune responses last up to 8-12 months, she said. The immunity, therefore, is going to last for a couple of years though for how long exactly is something that can’t be said as of now, she added.

Swaminathan described responses by some of the countries as ‘frustrating’. “The WHO has been saying for more than a year now that before vaccinating children, countries should donate their doses to other countries (to immunise vulnerable sections). But individual countries make their own decisions,” she said.

She noted that as far as the WHO was concerned, it was quite clear that at least 10 per cent of populations in all the countries should be vaccinated by September and 40 per cent by December this year, before countries start thinking about boosters.

However, she did add that the study which Pfizer did on boosters was important and studies like it should keep happening. “Some studies have shown that boosters given after six months of full immunisation can increase antibody level so high that they protect against all the variants. Essentially, we don’t know at this moment as to what level of antibodies are required,” she said.

She added that the booster science of different vaccines may differ since they are made on three different technologies — messenger ribonucleic acid (mRNA), viral vector and inactivated virus.

In essence, one will have to wait and watch. Swaminathan said studies on mixing and matching of vaccines across technologies had so far shown very encouraging results in terms of safety and efficacy.

Legal indemnification to vaccine manufacturers has become a major bottleneck for many countries, including India, to procure vaccines. Swaminathan shared her thoughts on whether countries really needed to provide it to vaccine producers.

“What we have currently is an unprecedented situation since the jabs are being put into people’s arms at scale, with limited efficacy and safety data and unexpected adverse events can occur. Therefore, the risks for these companies get multiplied,” she said.

“What we have done as part of COVAX, the global vaccine-sharing alliance, is if a serious adverse event occurs to beneficiaries who have vaccines according to this programme, they would get compensation from insurance companies for whom premium would have been paid by us. This would ensure nobody has to engage in a legal battle on an individual basis,” she said.

Swaminathan added that a standard text to this effect was prepared for 92 advance market commitment countries and it was up to them to use it while signing deals with companies.

She said she understood that multilateral companies had demanded indemnity in India before sending vaccines and hoped the government here would be discussing things at multiple levels in this context. But, she added that if one company in a country gets indemnity, then it should be given to all without exception.

The WHO had appointed a taskforce to boost the production of vaccines, she said. It has already decided to establish an mRNA tech transfer hub in South Africa and see if the pilot project works. If it did, then COVID-19 would serve as an opportunity in a crisis to boost vaccine production against many diseases in these deprived countries.

Swaminathan minced no words to say that COVAX was a beautiful idea which could not deliver the way it was envisaged because none of the manufacturers actually prioritised it. However, she hoped that in the coming months, the situation would ease.

Leena Menghaney, regional head (South Asia), Médecins Sans Frontières, said the fact that COVAX could not deliver as one thought it would, did have a precedent in history. She pointed to the availability of antiretroviral for HIV patients. “Countries in the WHO’s African region would usually lag behind 10 years as compared to the rich nations in the West. The same is happening in the case of COVID-19,” she said.

Swaminathan accepted that while the world had moved fast on vaccines, not much was done on the front of therapeutics for COVID-19. There are no antivirals as such and not many drugs that can be prescribed for patients in the early stage of COVID-19. All that we have is two sets of drugs — corticosteroids and interleukin-6 blockers — for severe patients. Monoclonal antibodies may be given to patients earlier than reaching a severe stage but it is a costly cocktail of treatment, she said.

Menghaney also pitched for waiver of intellectual property rights for therapeutics for COVID-19 as and when they emerge so that what happened with vaccines should not happen with them.

Shabeer Madi, professor of vaccinology at South Africa’s University of the Witwatersrand pitched for greater stress on taking care of African countries if the international community wanted to find long-term solutions for the novel coronavirus.