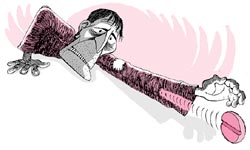 a group of 12 European institutional investors has come out with a prescription for the international pharmaceutical industry, exhorting the latter to provide developing countries with easier access to urgently required medicines -- both in terms of affordability and availability. The financial entities made this suggestion in a recent statement issued to 20 drug manufacturers around the world.

While the investors' opinion does not stem from a welfare motive -- they are concerned about the companies' long-term profitability because of business interests -- the move could have a significant spin-off. It may have a bearing on World Trade Organisation (wto) negotiations on access to cheaper medicines for poor countries. There has been a deadlock over this issue since December 31, 2002, when the us blocked an agreement that it felt was too wide in its coverage of diseases. This was the deadline set at the Doha ministerial meeting in November 2001 to conclude the negotiations.

The investors' group, led by isis Asset Management Public Limited Corporation and Universities Superannuation Scheme Limited, represents funds to the tune of us $940 billion. Senior analyst at isis, Olivia Lankester, is reported to have said: "(Even as) there were very important humanitarian issues, the statement emerges from a deeper concern about the (long-term) impact of the prevalent public health crisis in the world ... on shareholder value." The investors fear that a failure to respond to the crisis in a proactive and coherent manner could damage the sector's reputation and undermine support for the global patent regime.

They argue that if the crisis gave rise to an unprecedented public health response, the criticism would most likely be targeted at pharmaceutical companies. The investors said that the drug manufacturers would then need to demonstrate that they are not obstructing poor people's access to medicines world over.

It is further pointed out that failure to do so could jeopardise the pharma sector's reputation and its "licence to operate" in those markets. Worse, it would pose a threat to the international patent system -- taken for granted at present.

Citing examples of good practice, the investors have recommended various measures. These include differential pricing for relevant product ranges in relation to the disease burden and affordability of the medicines within each market, implementation of World Health Organization guidelines for drug donations, not enforcing patents in least developed countries, taking measures in conjunction with respective country governments to prevent the re-importation of differently priced products into markets of developed countries and disclosing and reporting on delivery of commitments to research on relevant diseases.

The group has also called upon the companies to lobby with governments to address the crisis, and disclose its policy position on emerging market issues such as the negotiations in the wto on Trade-related Intellectual Property Rights and Public Health.