But a poor way to bell the malnutrition cat 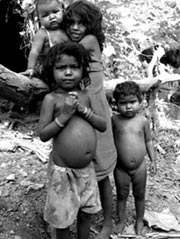 How should malnutrition in Asia be tackled? This was the question that animated the Regional Ministerial Consultation on Maternal and Child Nutrition, held under the aegis of the World Food Programme (wfp, a un body) from September 15 -17, 2004 in Delhi. And the answer 21 country representatives found the most attractive -- it is enshrined in the "Delhi Declaration", an outcome document adopted at the meeting -- was that nutrition should become an integral part of poverty alleviation programs might be the answer.

Easier declared than done. wfp itself accepts that if this idea is implemented, it would take 40 years for its effects to be visible. The meeting was also an attempt to create a platform for regional cooperation: so why didn't country representatives wishing to learn from each other's experiences talk about the reasons nutrition-based programmes in the region abjectly fail? At the meeting, India's Integrated Child Development Services (icds) was cited as a programme to be emulated. But the Indian government's 10th five-year plan document itself calls it a failure. icds has been around for 25 years; meanwhile, malnutrition among children aged 6-23 months has increased from 11.9 per cent to 58.5 per cent. A reason for the failure, speculate experts, is insufficient awareness about what nutritious food is. icds merely provides ready-to-eat food such as the India mix (a mixture of wheat, soybean and vitamins, amongst others) instead of telling people why such food is good. Would other countries like to replicate this experience? Given that icds is a World Bank programme, would poor Asian countries like to get embroiled in debt-servicing?

Moreover, putting the idea into place in India would mean re-thinking the "food for work programmes". It would mean coordination between different ministries -- an impossible task: even the nutrition mission headed by the prime minister was unable to get them together! Also, wfp would have to provide not just any food but "nutritious" food. wfp is donor-driven and buys food. It does try to buy from developing countries, for their economic benefit. (In 2003, wfp purchased 2 million tonnes of food from developing countries. Around 660,000 tonnes were purchased from Asia, providing the continent us $150 million. India provides for all wfp programmes by itself, and also supplies to programmes elsewhere.) But if wfp moves towards fortified food, developing countries would have to be helped to develop capacity to supply such food.

In all, the meeting merely showcased unbridgeable gaps between planning and people's health. "Instead of distributing fortified food, the women of the family needs to be taught how to supplement diet using food available at homes," says Shanti Ghosh, a Delhi based mother and child health consultant. But does wfp understand that?

A last, distinctly unhealthy, feature of the meeting: the World Bank and Asian Development Bank attended it.