Summer is only just setting in. And already there are reports of deaths in Orissa due to a heat wave 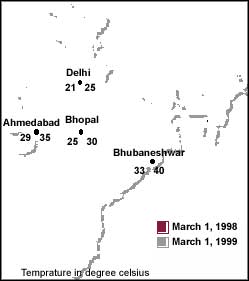 with the mercury rising above the 40 c mark in the first week of April itself, it is not surprising that 19 people have already succumbed to the unusual heat wave that hit Orissa as early as the last week of February. Although officials at the Indian Meteorological Department ( imd ) dismiss the prevailing conditions as "not a very serious matter", the heat has already forced people to stay indoors during the day. Even offices function only between 7 to 10 am. Buses have stopped plying in the afternoon and the government has declared that all school/college examinations will be completed in April.

"We are yet to ascertain the causes of the heat wave," says S R Kalsi of imd , Delhi. According to him, it is not a very serious matter. "It does not have anything to do with global climatic patterns like El Nio or La Nia. It is just a regional climatic phenomenon," he says. Asked if there is any chance of this phenomenon recurring and becoming a regular feature, he says, "This will not carry on for a long time. It is a freak heat wave and will not persist."

Some experts believe that the heat wave might become a regular phenomenon "if we are to believe that global warming is for real". "It is not only Orissa. Temperatures are rising all over," says M Lal of the Indian Institute of Technology, Delhi. According to him, there might be some anomaly in the areas where monsoon depressions occur. However, he adds, everything cannot be attributed to the rise in greenhouse gas emissions. Change in the land-use patterns, such as shifting cultivation and deforestation can also lead to atmospheric anomalies. Priyambada Mohanty-Hejmady, a reputed scientist based in Bhubaneshwar believes deforestation and rapid urbanisation might have contributed to causing the heat wave.

A comparative study of temperatures on March 1 in 1998 and 1999 shows that in Delhi, Bhopal, Ahmedabad and Bhubaneshwar, there has been an increase of 4 c to 7 c in temperature.

Orissa experienced a similar heat wave in 1998. Though it hit the state relatively late, the heat wave claimed about 2,000 lives. The unusual rise in the temperatures started by the end of May 1998 and continued throughout the year. During the festival of Dusshera (September-October), which marks the onset of winter in Orissa, the temperature was 40 c . The much-awaited winter -- a spell of extreme cold -- lasted for a mere 25 days. And then the mercury started rising again.

According to G Behera of the remote sensing department in the state capital Bhubaneshwar, atmospheric cycles have not been showing normal patterns. "As the air on the land heats up, it rises and air from the sea takes its place. This cycle creates an atmospheric balance. But it is not happening here, and we have to find out why," he says. The state government has already sanctioned a project to study this unusual weather pattern, says Behera. It might take three to four months for the experts to come out with their findings.

The heat wave in 1998 was more intense in western Orissa, which is generally warmer than the coastal region. However, this time the heat wave is being felt all over the state. "The fact that Bhubaneshwar has become the hottest town in the country is not very pleasant. We did not get September rainfall that is customary here," says Mohanty-Hejmady.

Further rise in temperatures in April and May can lead to chances of good monsoons, says Lal. However, pre-monsoon showers in April could indicate unusual monsoons. "Variations in the monsoons as a whole are already being blamed on global warming," says Lal. This winter the western Himalaya received more rain than the eastern Himalaya. And there is likely to be more. Lal also adds that this is not a cycle. "We have been experiencing a lot of extreme weather conditions and this can get worse," he says.

According to Banka Behari Das, a noted Bhubaneshwar-based environmental activist and former minister, experts attribute the heat wave to the hot wind blowing from the northeastern part of the country. "But if there is hot wind blowing from the northeast, why aren't places like Calcutta, which fall in its path, experiencing the heat wave as well?" Das questions.