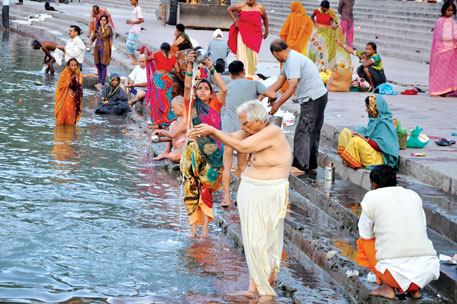 MILLIONS visit Haridwar and Rishikesh every year to take a dip in the Ganga. This leads to an overlaoding of waste treatment facilities and causes the spread of antibiotic-resistant microbes in the region, particularly in May and June, say researchers from Newcastle University, UK, and the Indian Institute of Technology, Delhi. Researchers sampled water and sediments at seven sites along the upper Ganga and found that the levels of a resistance gene in microbes which turns them into “superbugs” were about 60 per cent higher in May and June than at any other time of the year. The resistance gene studied was blaNDM-1. It is known to cause extreme multi-resistance in many bacteria. When levels of blaNDM-1 in February and June were compared, they were 20 times higher per capita during the peak season. Until recently, bacteria that carry blaNDM-1 were only found in clinical settings, but in 2008, bacteria with blaNDM-1 were found in surface waters in Delhi.

The team showed that overloading of waste treatment facilities in the area was the probable cause for the spread as untreated sewage was discharged straight into the river where the pilgrims bathe. The reseachers say the spread of resistance genes could be prevented by improving waste management at key sites.

“This is not a local problem—it’s a global one,” says lead researcher of the study David Graham, an environmental engineer from Newcastle University. “We studied pilgrimage areas because we suspected such locations would provide new information about resistance transmission via the environment,” he adds. The study was published on February 17 in Environmental Science and Technology.