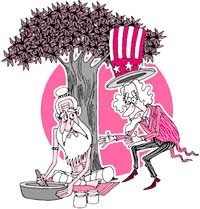 ayurvedic drugs are once again under a cloud of controversy, this time for containing high amounts of heavy metals. A recent scientific paper suggests that 20 per cent of Ayurvedic medicines available in the us contain heavy metals like arsenic, lead and mercury beyond the limits permitted in the country. Drug manufacturers say this is no cause for alarm, because the inclusion of the metals in the drugs is deliberate, to enhance efficacy. Nearly 50 per cent Ayurvedic products contain at least one metal but these are detoxified, they claim.

The study "Heavy Metal Content of Ayurvedic Herbal Medicine Products" (Journal of American Medical Association, Vol 292, No 23, December 15, 2004, p 2868) was a joint effort of many institutes, including Harvard Medical School, Boston and Beth Israel Deaconess Medical Center, Boston. The researchers collected 70 herbal products, manufactured by 27 different companies, from areas around Boston and sent them for testing to the New England Regional laboratory of the us Environmental Protection Agency (epa). Paranjay Sharma, president, Shree Baidyanath Ayurved Bhawan Private Limited, Delhi, argues that "the study applied norms for heavy metals in food to Ayurvedic drugs. This was unfair because these products are medicines". Many allopathic medicines also use heavy metals, he adds. Baidyanath is one of 26 Indian companies whose drugs contained heavy metals.

In the us, herbal medicines are marketed as dietary supplements, regulated under the Dietary Supplement Health and Education Act (dshea), 1994, that does not require proof of safety or efficacy. They are, thus, considered food products. In India, they would be covered by a specific provision under the Drugs and Cosmetics Act, 1940, which would permit the presence of heavy metals in them because they are made using traditional methods. The study used recommended daily dosage to calculate the total amount of metal ingested per day.