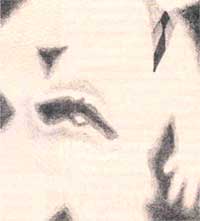 EVEN x-ray machines and metal detection chambers are not always able to detect hidden guns and knives. But if a us $2 million'sclipme of the us Department of justice succeeds, it will become tougher to slip concealed arms and drugs past security systems.

The department is evaluating 3 competing technologies to see which is t1le closest to providing fool-proof detection kits. The 3 firms are Millitech of South Deerfield, Massachusetts, Raytheon of Portsmouth, Rhode Island, and the Department of Energy Is Idaho National Engineering Laboratory (INEL) at Idaho Falls (New Scientist, Vol 146, No 1975).

Millitech is the only company to have demonstrated a working model, which relies on a camera that registers electromagnetic waves in the millimetre range - shorter than microwaves, but longer than infrared. It boasts of being able to detect anything from pistols to hypodermic needles and bags of drugs.

Because the human body is warm, it radiates large amounts of energy at millimetre wavelengths, explains Richard Huguenin, Millitech's founder and the inventor of the camera. Seen through the camera - an array of sensitive radio receivers - people glow brightly while other materials look much darker.

"Metals emit very little energy at these wavelengths, but they reflect the ambient temperature, so they show up as 20'c shapes against the bright 37'c body," says Huguenin. Ceramics and plastic bags show up as shades of grey.

The Raytheon system, which can be demonstrated only after 2 years, will work by firing a low-energy electromagnetic pulse, known as a Heaviside pulse. Depending on their size, shape and composition, different objects reflect this pulse back in a different way. Raytheon hopes that these signatures may help them create a catalogue and identify individual guns as a person passes through the device.

INEL'S system, which should be ready for demonstration by '96 end, monitors the changes in the earth's magnetic field caused by metal objects passing through it. "Objects such as knives or guns cause local aberrations," explains INEL researcher Phil Rice. "These anomalies will be sensed a'nd measured by sensitive magnetic instruments."

The new technologies look promising, but would it be just a matter of time before devious minds outsmart them?