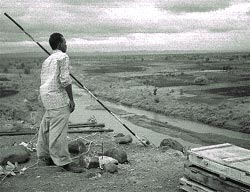 June 7 saw the life of Binda bai, a tribal woman belonging to Golkheda village in Madhya Pradesh's (mp) Khargone district, change drastically for the worse. The day had begun on a normal enough note, with her husband Jawan Singh setting off to work in his fields. But the 55-year-old farmer never returned. He had committed suicide by consuming endosulfan. The reason for the extreme step: a recent notice, served on Jawan Singh under Section 9 of the Land Acquisition Act, 1894, requiring him to relinquish his 1.2-hectare (ha) tract as it was falling under the submergence zone of the proposed Upper Beda Project. The venture involves the construction of a 2.30-kilometre-long dam, which will provide irrigation facilities for 71 villages in 9,900 ha of culturable command area.

"He had said he would rather die than be displaced," recalls a wistful Binda bai . In the altered policy, the land-for-land clause has been watered down. The nvda official explains: "Over a period, several tracts have been distributed to the landless in Madhya Pradesh. Hence, there is now a shortage of land." But the 2002 report shows more than 1,323 ha in 15 villages as surplus land for displaced families. It is intriguing how most of these tracts are no longer available in a short span of two years. In the mp government's latest record of 'surplus' land, the tracts that can be spared have been reduced to 400-500 ha. Worse, they are small patches spread across 35 villages.

Another section that has been deleted from the policy pertains to the granting of at least 2 ha land to landless families. The nvda official questions the rationale of the removed clause: "What will a landless person, who does not practise agriculture, do with land? We committed this mistake in the 1970s when land was distributed to the kevat (boatpeople) and they failed to cultivate it. Our experience shows that people prefer cash compensation."

The nvda official defends the current r&r package: "Firstly, the market value of land (for monetary compensation) is calculated. Secondly, we offer a special rehabilitation grant. Sops for the landless include a rehabilitation grant of Rs 18,700 and financial aid worth Rs 49,300. Giving money also makes sense when only a part of a tract is to be affected. Suppose a person has 4 ha of which only 20 per cent is being submerged. Won't monetary compensation be more beneficial than alternative land in some far-off place?"


Not surprisingly, the affected people have decided to fight it out. They launched their struggle in 1996-1997 when the project began to be implemented. Work on the dam was halted for a while following the initial protests. In 1998, the state government formed a task force to look into the matter, which suggested that alternative forms of irrigation be explored. But no headway was made in this direction.

Local people assert that various alternatives to dams, such as decentralised water management systems, have indeed proved successful. They cite the example of Roopkeda village in Khargone where villagers have constructed nine earthen dams and 57 boulder check-dams during the past three years. This has recharged the groundwater and raised crop yield, leading to an annual increase in income to the tune of Rs 8-10 lakh for the village.

The tribals further allege that their protests are stifled. Over the past few months, a group of villagers blockaded the dam site and did not allow machines to be taken there. "But on May 23, the nvda officials came with a police force which arrested 125 people. The officials then forced their way to the dam site and started construction," recounts Rewari bai of Udaipur village. nvda says the people were warned before the police swung into action.

The people now plan to pressure nabard to cancel the sanctioned amount. However, A K Mathur, chief general manager, nabard, Bhopal, is guarded: "We are concerned about the rehabilitation of all project-affected families (pafs), but how the government does this (by giving land or money) is its outlook."

As more ventures like the Upper Beda Project get underway, they are bound to create 'development refugees'. In such a scenario, can mere monetary compensation amount to rehabilitation of pafs? While the Union ministry of tribal affairs is said to have a called a stakeholders' meeting on June 28 to discuss the Beda project, a wider review of the entire country's r&r policy by the new Union government is in order.