DISEASE patterns are changing world over. Deaths from infectious diseases, poor nutrition and maternal and child illnesses, which used to be the key global killers two decades ago, are down. More people today die of non-communicable diseases such as high blood pressure and due to tobacco and alcohol consumption. This is one of the key findings of a study on the global burden of disease, published in The Lancet on December 13, 2012.

The data has been generated by the Global Burden of Diseases, Injuries, and Risk Factors, a worldwide scientific collaboration to quantify health loss. Similar studies were also made in 1990, 1999-2002 and 2004. The latest study is a collaboration between seven institutions, including WHO.

High blood pressure, which often leads to heart diseases and strokes, was the fourth global killer in 1990. In 2010, it topped the list of 67 risk factors analysed for the study. It snuffed out 9.4 million lives across the globe and accounted for 7 per cent of disability-adjusted life-years (DALYs)—a measure of the years lost to ill-health, disability or early death. Tobacco accounted for 6.3 per cent of global DALYs.

The biggest contribution to the burden of disease is, however, from a combination of faulty diet and lack of physical activity. These lead to ischaemic heart disease that accounted for 10 per cent of global DALYs in 2010 (see graph). 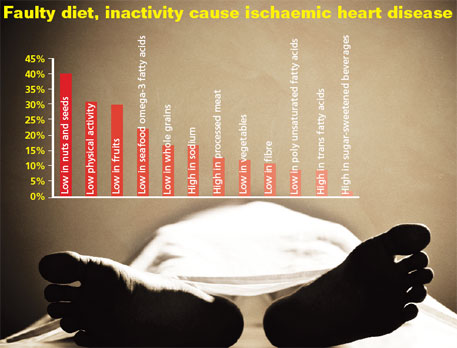 The greatest culprit was a diet low in fruits. It was responsible for about 4•9 million deaths and 4•2 per cent of global DALYs. Low fruit intake as one of the risk factors jumped from eighth position in 1990 to fifth in 2010. Men were 1.5 times more prone to the risks caused by a diet low in fruits.

Low intake of whole grains is another factor putting burden on health. It was at 18th position in 1990 and went up two notches in 2010. Intake of fiber foods is also declining, which was indicated by its position at the 24th place in 2010 as against 26th in 1990. High Body Mass Index as a risk factor that is attributed to high cholesterol level, increased in rank: from 10th to 6th in 20 years.

Effect of physical inactivity has been studied for the first time in this round. Physical inactivity and lack of activity alone are the 10th biggest risk factor world over, responsible for 3.2 million deaths and 2.8 per cent of DALYs in 2010.

The study marks a milestone in global health knowledge. It will once again set the terms of health policy, planning, and funding discussions for years to come, says Jim Yong Kim, president of the World Bank in a comment in The Lancet.

What the study holds for India

Evidence-based planning would help India, say experts. “India today faces dual burden of disease where there is a set of population that is malnourished and one that is overweight. So action has to be multisectoral in that food prices have to be regulated, fruits and vegetables have to be subsidised, urban planning has to be done to make areas walking-friendly and gear up the entire health system,” says Monika Arora, who heads the Health Promotion and Tobacco Control unit of Public Health Foundation of India, an advocacy group.

Across South Asia, including India, the top 10 risk factors are household air pollution from solid fuels, tobacco smoking, high blood pressure, childhood underweight, a diet low in fruits, particulate matter pollution, alcohol use, iron deficiency and suboptimal breastfeeding. Anoop Misra, director of Fortis C-DOC Center for Excellence for Diabetes, says the need of the hour is to focus on the middle class that comprises 50-60 per cent of the population. The rich are aware and are becoming fitter. Enough efforts are going on for the bottom 30 per cent. It is the middle class that is unaware and careless about diet, Mishra adds.