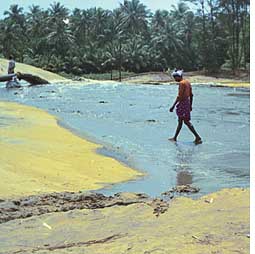 New evidence says that all radiations do not lead to cancer

RADIATION protection standards say that all doses of radiation, big or small, risk human health and lead to cancers. For example, the entire cycle from extraction of nuclear material to waste disposal, exposes workers to ionising radiation that is harmful to health. A new study, however, asserts that the detrimental effect is limited to artificial radiations and does not include natural radiations.

Natural radiations, also called background radiations, come from isotopes of uranium and thorium present in soil and rocks. These radiations are often of an intensity higher than those from the nuclear industry. Researchers from the Regional Research Centre, Kerala recently analyzed relevant data on people living in the coastal belt of Karuna gappally where they are exposed to high background radiations all the time (see box: "Radiating sands"). The team found the risk of cancer to be the same as in any other part of the country.


The researchers obtained data from a survey carried out during 1990-97 for cancer registry in Karunagappally. Information was collected on 360,000 individuals (90 per cent of the population) using a questionnaire covering socio-demographic factors like lifestyle, dietary habits, alcohol and tobacco use.

From the data collected, they focused their study on people living in four areas (Chavara, Neendakara, Panmana and Alappad) in the coastal belt with high levels of background radiation and two areas (Oachira and Thevalakkara) with relatively low levels of radiations.

This comprised 70,000 individuals in the age groups of 30-84 years. They estimated the cumulative radiation dose (indoors and outdoors) received by each individual, taking into account how long and where each stayed during that period. By the end of 2005--the year until which the surveyed households were followed up on--the researchers identified 1,349 cancer and 30 leukaemia cases. They did not find any link between these cases and levels of background radiations.

Published in the January 2009 issue of the journal Health Physics, the study concluded that risk of cancer did not increase with exposure to high radiations. Diseases like thyroid cancer and leukaemia, that are radiation sensitive, were analyzed separately. Neither showed any increase in risk. The results held true for all age groups.

The findings are in line with what researchers in Germany reported and published in the Archives of Environmental and Occupational Health (Vol 61, No 3, May 2006). Based on research done on a large population of Germany, the study found no significant correlation between background radiation and risks of cancer. Similar research on people living in a high-level background radiation area of Yangjiang city, China, found that cancer levels were not linked to levels of high radiation. This came out in the 2000 issue of Journal of Radiation Research ( Vol 41).


There are studies that speak differently. A 2002 study published in the journal Proceedings of National Academy of Sciences reported genetic mutations caused by exposure to background radiations in Karunagappally. R S Lalmohan, former principal scientist with the Indian Council for Agricultural Research, did another study. "We observed a high cancer incidence due to high exposure to background radiations," he said. He suggested that the present study was faulty as it was limited only to six areas.

K S Parthasarathy, former secretary of Atomic Energy Regulatory Board, said while this analysis cannot be faulted scientifically, studying all data available is advisable. "The high background radiation area in Kerala is unique as it has a high population density compared to such areas elsewhere," he said.

While researchers mull over the status of natural background radiations, the harmful effect of artificial radiations has been established. A 15-country study on nuclear workers, released in the April 2007 issue of the journal Radiation Research, found an increase in cancer risk from radiation exposure.