Diabetes on the rise in India 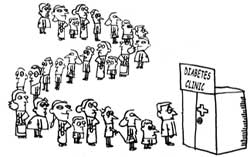 about 12.1 per cent of adults over the age of 20 in India suffer from diabetes, reveals the National Urban Diabetes Survey (nuds) carried out by the Diabetes Epidemiology Survey Group in India (desi).

The survey was carried out in six cities -- Bangalore, New Delhi, Kolkata, Mumbai, Chennai and Hyderabad. The survey highlighted the differences between the prevalence of the disease in different parts of the country. The sample size and the type of people who were considered in the study were established statistically. Guidelines set down by the World Health Organisation for epidemiological studies in diabetes were followed. The door-to-door survey carried out between January and August 2000, included a total of 11,216 people above the age of 20 years. These people belonged to different socioeconomic groups.

Blood sugar levels were measured after people were made to fast overnight and two hours after giving a specific amount of glucose. The results show that there were no major differences in the prevalence of the diseases amongst men and women. The prevalence increased with increasing age and was higher in unemployed and retired people. An important observation was the fact that igt was high in people below 40. The survey showed that more and more people are becoming prone to igt. This indicates that the number of diabetic patients is bound to increase in the future.

Earlier studies had shown that diabetes is more prevalent in urban areas even though the number of people showing igt symptoms is similar in both urban and rural area. This might indicate that the urban environment triggers the conversion of igt into full-blown cases of diabetes.

The increase in diabetes is alarming. "It is essential that the government creates awareness about this new chronic disease," says Anil Kapur, who was part of the team that carried out the survey. "We have higher incidence of the type ii of diabetes which is directly linked to the lifestyle and can therefore be prevented or delayed," he adds. It is also important that both the doctors and the patients are aware about the disease, he feels. "The disease burden due to diabetes is further worsened because of the related problems such as heart problems, blindness and kidney failure," says S K Wangnoo, diabetologist at Indraprastha Apollo Hospitals, New Delhi.