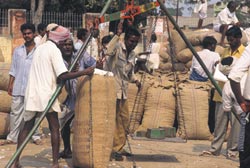 a model is being set up to reform agricultural marketing across India. It would enable farmers to sell their produce at the most remunerative prices. In order to effect this change, the Union ministry of agriculture has prepared a draft legislation on which the state governments' own crop marketing development and regulation acts will be patterned.

At present, farmers can sell their produce only in mandis (wholesale markets) notified by state governments. "This system was introduced in times of deficit, when farmers were ignorant. Today, it is leading to farmers getting low prices for their produce as well as customers paying high prices. The profits go to agents who control mandis," points out P K Agarwal, agricultural marketing adviser to the ministry.

The current mechanism, therefore, does not permit an industry to purchase agricultural produce from a farmer directly. "There is great mobility of produce and commodities now. Why should the farmer be forced to sell the produce locally?" asks Agarwal. R C A Jain, secretary in the agriculture ministry, feels that farmers should be allowed to maximise their gains.

The move to overhaul the system was initiated in 2000, with the ministry forming an expert committee and a task force. Their reports called for easing of controls over agricultural markets to pave the way for the private sector's participation.

So, will the vulnerable small farmer be left to the mercy of the market? Agarwal asserts that this would not be the case because the government would continue to declare minimum support prices. Also, the government mandis won't be abolished. "It is like allowing private airlines to operate alongside Indian Airlines. Competition will only usher in greater efficiency," he adds.