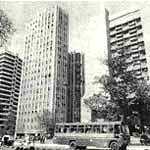 The Delhi Fire Service wants legislation with "more teeth" to bring to book the owners of more than 100 high-rise buildings in the Capital for not installing basic fire safety measures. Noncompliance of minimum fire safety requirements in government-owned buildings has prevented the penalisation of the owners of private buildings.

Under the Delhi Fire Prevention and Fire Safety Act, all multi-storey buildings must have at least 12 safety measures, including an approach road wider than six metres, a 50,000-litre water tank, hose reels, portable fire-fighting appliances and unobstructed fire escapes. In 1991 alone, show-cause notices were served to the managements of 20 government-owned and 52 privately-owned buildings for not possessing even five of these prerequisites. Though the fire service is empowered to impose fines and seal buildings, they cannot take any action against privately owned buildings until government-owned buildings install fire safety measures. Says Delhi's chief fire officer S K Dheri, "The buildings are ticking time-bombs."

Meanwhile, at a recent international seminar on fire safety held in the Capital, participants agreed to phase out ozone-depleting halon fire extinguishers. "A halon phasing-out committee has been constituted to identify alternative fire extinguishers," said Dheri.