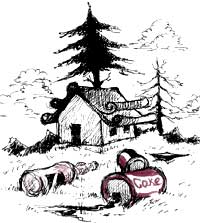 sikkim , renowned for its beauty, is now at the mercy of 'the golden hordes' -- tourists, who have swamped the state in recent years after terrorism led to a decline of tourism in Jammu and Kashmir. In a span of five years, from 1988-1994, tourism to Sikkim increased over 155 per cent. By the end of the century, the annual number of visitors to the state is expected to touch 400,000. But tourism has again proved it is not the goose that lays the golden egg and has led to widespread ecological degradation.

Foreign tourists, who account for only 10 per cent of the visitors, are aware of the adverse environmental impacts of tourism. But domestic tourists, making up the remaining 90 per cent, have not learnt to respect nature. They move freely in environmentally sensitive areas, destroying vegetation and leaving behind nonbiodegradable waste.

"Local forests in all areas are under heavy pressure due to fuel, timber and fodder requirements," says S C Rai of the Sikkim unit of the G B Pant Institute of Himalayan Environment and Development (gbpihed). In spite of the restriction on felling of trees for construction (a double-storeyed lodge needs about 600-700 cubic feet of wood), huge amounts of timber are still being used. Felling has changed the forest composition and density, says R C Sundriyal of the gbpihed . According to Rai, further increase in tourism could irreparably harm Sikkim's forest resources.

The indirect revenues earned by the Sikkim government in 1996 amounted to about us $1.7 million. But only 10-12 per cent of this was spent on accommodation, package tours and gifts and souvenirs, which benefits locals. In the absence of planning, a few resourceful people make profit, leaving little for the locals.

The state, with a population of just 405,505, is rich in plant and animal resources. Of the 6,000 plant species native to Sikkim, there are about 100 medicinal herbs, 35 species of rhododendron and over 400 species of orchid. Fauna includes 1,400 butterfly species, 1,200 moths, 550 species of birds, 144 mammals, 39 reptiles, 9 amphibian and 16 fish species. To protect the biodiversity, national parks and sanctuaries have been declared and a few more are proposed.

An area of high cultural heterogeneity, Sikkim's sacred lakes, peaks and monasteries, attract many tourists. Trekking, nature and culture tourism have increased dramatically over the years. The most popular circuits are the Yuksom-Dzongri trekking trail, Tshangu lake and the Changthang-Lachung-Yumthang area. The Yuksom-Dzongri trekking trail in western Sikkim passes through almost uninhabited areas and pristine forests. Tshangu lake, situated amongst alpine pastures, attracts a large number of tourists despite its location in the restricted zone. The Changthang-Lachung-Yumthang area in north Sikkim offers a mix of typical Sikkimese culture, peaks and trekking through forests.

This has placed a heavy pressure on the forests. A preliminary survey conducted by gbpihed shows that hotels and lodges consume about 40 kg of fuelwood per day. A group of trekkers on an average consumes about 240 kg of fuelwood per day. Users do not differentiate between fuelwood and other trees. "The choice of fuelwood used has changed from Castanopsis (katus) and Quercus (oak or phalant) to Alnus nepalensis (utish) and Engelhardtia (mahuwa) and many shrub species -- there is indiscriminate lopping. At Dzongri, rhododendron trees are cut for firewood," says Sundriyal.

Depletion of fir trees has accelerated erosion at Tshoka on the Yuksom-Dzongri route and in the Changthang-Lachung-Yumthang area. Pack animals -- yak and cattle -- require 30 kg of fodder per day, which is supplied by forests along the trail.

The gbpihed , with aid from the Biological Conservation Network, has been promoting cultural tourism that benefits the people in Sikkim. To meet the requirements of tourists, locals are being given basic training in hospitality management. But education of tourists about environmentally responsible behaviour is yet to be taken up.