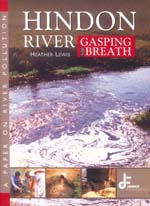 THE book under review studies pollution in the river Hindon--a tributary of the river Yamuna--and its impacts on villagers in six districts in western Uttar Pradesh. It's the outcome of an eighteen-month study undertaken by the Merrut, up-based ngo, Janhit Foundation. Twelve villages in Saharanpur, Muzaffarnagar, Meerut, Baghpat, Ghaziabad and Gautam Budh Nagar were studied water quality studies and health surveys were undertaken.

The book's starts by incriminating large-scale water extraction and indiscriminate release of domestic sewage and industrial effluents for the Hindon's misery. At most places on its 260-km stretch, the river is a veritable drain.Paper, sugar mills and distilleries have taken an enormous toll, so have dairy units, textile manufacturers and slaughter houses. These conclusions are alarming, but they should, however, have been substantiated with data on the quantum of water extracted and the amount of pollutants discharged.
There are alarming facts on the Hindon's biochemical oxygen demand (bod)--the amount of organic biodegradable matter--and the dissolved oxygen level. In fact, there's very little oxygen throughout the river's 260 km stretch and this explains the high bod levels. The standards designated for bathing are dissolved oxygen of minimum 5 mg/l and a maximum bod of 3 mg/l.

The study also investigated for macro-invertebrates. This has was on the principle that different species have different levels of toleration to water pollution. A monitoring system developed in the uk was used. Of the five samples studied, four scored a water quality class e-- the lowest class.

The data on heavy metals and pesticides in the river are also shocking. Presence of three heavy metals--lead, chromium and cadmium--were confirmed. At three locations in the Hindon, lead levels exceeded the permissible level of 0.01 mg/l at Hindon and Kali (west), they exceeded permissible levels by 179 and 112 times. Chromium levels were in excess in all samples they 58, 46 and 123 times higher than the Central Pollution Control Board's (cpcb's) standards in Kali (west), Krishni and Hindon rivers respectively. Cadmium levels exceeded the who standards of 0.003 mg/l in 40 per cent of the samples.

The research also investigated the presence of pesticides endosulfan I alpha and II beta, endosulfan sulphate, alfa bhc, beta bhc, other isomers of bhc, heptochlor, heptochlor epoxide, fipronil and aldrin. Pesticides were found in all surface water samples but only at three locations the levels exceeded the levels of 2.5 microgrammes per millilitres prescribed by the cpcb for surface water. The cpcb has not specified standards for pesticides in surface water. But pesticide content in 80 per cent of the samples exceeded levels permitted by the Bureau of Indian Standards. More alarmingly, the study found fipronil in water. This new generation pesticide was found in levels very close to the prescribed levels.

The polluted surface waters have seeped through the area's porous soil and impaired groundwater. Lead was found in groundwater samples in all villages at Chandenamal village they exceeded who standards by 34 times.

In five out of seven villages, the wells studied are still used for drinking as there are no other sources available. In another village (Simlana), water is not used for drinking, it is used for cooking and bathing. Lindane, a potent carcinogen and four organo-chlorine pesticides were detected in all well water samples. Chloropyrifos was detected in five out of the 12 samples.

One understands that the constant comparison between cpcb, who and bis standards is necessary to drive home the point about pollution, But it does confuse the readers. The graphs here could have done with some clarity. Sampling locations aren't clearly indicated.


The health survey found that commonly observed illness include cancer, neurological disorders, digestive disorders and skin lesions and respiratory afflictions. The author ascribes them to heavy metal and pesticide poisoning.

The study demands that the Uttar Pradesh Jal Nigam, the water supply agency and the department of health provide safe drinking water and adequate medical assistance to the affected villages. It also demands the pollution control boards (both at the centre and the state) take action against the violating industries. The author has urged the government to ban production and import of all pesticides.

To deal with domestic sewage, the book asks that the Union ministry of environment and forest include the Hindon river in its Yamuna Action Plan (yap) and provide funds for domestic sewage management. It is another matter that the fourteen-year old yap has failed to mitigate Yamuna's pollution.

The book concludes by hinting that if the bureaucracy turns a blind eye to this study, the Janhit Foundation would approach the judiciary.