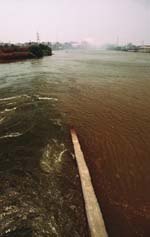 on january 7, 2006, the Kerala State Pollution Control Board (kspcb) permitted Hindustan Insecticides Limited (hil), a central government-owned enterprise manufacturing ddt and endosulfan, to resume production. This, even as environmentalists protested that the company has not met all pollution control measures.

On December 27, 2006, kspcb had asked hil to stop operations after the board found that the hil plant in Eloor panchayat had an underground pipe linking its effluent treatment plant to the Kuzhikkandam creek, which empties into the Periyar river. Eloor, an island on the Periyar, is the state's largest industrial hub while the river is a source of drinking water for three million people in and around Kochi.

The kspcb discovered the pipe on December 24, 2006, and subsequent tests found large proportions of endosulfan (68.3 milligramme/litre [mg/l]) and ddt (77.6 mg/l) in the acidic water flowing through the pipe, with a ph of 2.1.

The company could reopen only after implementing all pollution control measures, but the board has now permitted it to reopen after sealing both ends of the underground pipe. But says S D Jayaprasad, member-secretary, kspcb, "The underground pipe has been sealed, there is no reason why the company should not function."

hil officials feign ignorance of the existence of the pipe and claim an inquiry was being conducted to look into the matter. Protesters complain the board had booked hil only under the Water (Prevention and Control of Pollution) Act, 1974, despite the discharge having ddt and endosulfan, which was listed in Schedule i, Part ii of the the Hazardous Wastes (Management and Handling) Rules 1989.

But Jayaprasad refutes the argument claiming the hazardous waste rules were applicable only to solid effluents. "In strict legal terms, Jayaprasad is correct. But kspcb also needs to keep an eye on whether the solid waste is being converted into liquid and escaping the clutches of the act. Companies are required to submit a report every six months on the amount of effluents being let out and kspcb inspects and verifies it. But this is not being done," said Advocate P K Ibrahim, former chairperson of the Local Area Environmental Committee.

Environmentalists complain the Eloor gram panchayat council had not acted against the erring industries, though studies had shown the air, water and soil of the area had been severely contaminated by them. "The panchayat is hand in glove with the kspcb and the companies . They have also been instigating trade unions against us," says Purushan E of the Periyar Malineekarana Virudha Samithy.

Refuting the allegations, Eloor panchayat president P P Usha said the panchayat could not afford to drive away the factories that pay taxes of Rs 4 crore.

She said the panchayat regularly interacted and inspected the companies. "We do not have any powers under the Panchayati Raj Act, 1993, to shut down a factory. The panchayat has formulated a plan for cleaning the creek and constructing bunds on either side at an expense of Rs 24 lakh," she added.