Research on guns that recognise the owner's voice, touch and even fingerprints is expected to revolutionise sharpshooting by the US police 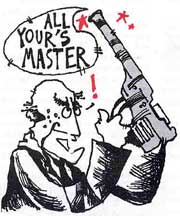 THE us police is developing a 'safe gun' that will fire only when held by its rightful owner. Several police and army personnel who are killed on duty, are often accidentally killed by their own gun or by one belonging to a partner. Two years ago the us department of justice asked a government laboratory in New Mexico to investigate the possibilities of a new technology to help reduce the number of such deaths by devising a gun that recognises its sole user.

The gun would not fire if it is held by another person - in essence, it is the type of futuristic gun used by cartoon characters! A consultation with police officers threw up a number of requirements the researchers had to meet. In particular, it required that the gun could be fired by either hand, so that round corners could be negotiated without exposing too much of the body. Also, a policeperson with an injured hand would want to shoot with the other.

The Sandia National Laboratory in New Mexico has recently made five prototype guns capable of recognising the touch or sound of their users. The first design requires an officer to wear a ring which, when touched against a reader on the gun's handle, allows it to fire.

However, the problem is that a ring could easily be lost, stolen or worn by a criminal. Besides, it would also have to be in perfect contact with the reader every time the gun is fired.

A variation of this is a ring or badge that contains a radio transmitter to enable the gun to check its user before firing. The benefit is that an officer would be able to fire with either hand without wearing two rings and would not need to make physical contact between the tag and the gun while firing.

A third idea makes use of a speech- recognition technology that only allows a gun to shoot when a key word is spoken by its t owner. The problem with voice recognition is that one cannot tell if the gun would hear the shooter over the background noise. Also, a voice can change under threat and anxiety. This could affect the gun's reliability.

. The laboratory has also tried a fingerprint reader incorporated into a gun barrel. This ensures that a gun would fire only if it recognises the user's finger or palm prints. Current technology to achieve this requires a processor and battery pack, too large to be assimilated into a handgun. A big problem with fingerprint recognition is that police officers often wear gloves when it is cold, or if they are frisking suspects they avoid touching. Cuts and grazes on fingers would add to the problems of recognition.

The New Mexico researchers have also worked on a simple remote control that turns the gun on and off like an automatic garage door. The idea is: the police officer would turn a gun on when it is drawn, and turn it off when placed in the holster.

The prototype guns have been handed over to the us department of justice, which is displaying the five technologies to police forces all over the us. The authorities want to ascertain the benefits and drawbacks of these guns as and when they are used by serving officers in the. streets. The researchers expect that once the 'safe gun' design is decided upon and approved of, the upgraded version could be made available to police, fire, prison and security officers in the country. The department of justice is slated to report later this year on the progress and performance of the safe gun. Based on these inputs, the findings will be covered in the magazine Biometric: Technology Today.