...depends on one's will-power and lifestyle and not genes 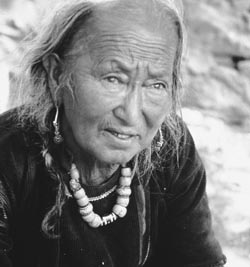 a growing body of research shows that it is their will and lifestyle and not genes that ensures individuals' passage into their hundreds. Their longevity depends less on who they are and more on what they eat and how much they exercise and keep their minds employed. "I am a vegetarian and do not smoke or drink. And I keep my bedroom window open 365 days a year," says Angeline Strandle of Massachusetts, at the age of 104. If life expectancy in the us continues to increase (it has risen since the beginning of the century from 47 to 76 years), people may routinely live to be 100 towards the end of the 21st century.

Ralph Paffenbarger, an epidemiologist from Stanford University, California, began tracking the health of 19,000 Harvard and University of Pennsylvania alumni in the early '60s, when strenuous exercise was considered dangerous for people over 50. The theory lost its significance when his 1986 study held that death rates fell in direct proportion to the number of calories participants burnt each week. Those burning 2,000 calories a week -- thanks to a lower rate of heart disease -- suffered only half the annual mortality of the couch potatoes in the group. In fact, researchers from Tufts University in Medford, Massachusetts, recently showed that weight lifting could benefit both the elderly and high schoolers.

Eating right is another criterion that helps staying younger, longer. Paul Whelton of Tulane University's School of Public Health, in New Orleans, Louisiana, has for the past decade studied the diets of 15,000 indigenous Yi in south-western China. According to Whelton, as long as the Yi stuck to their traditional diet of rice, a little meat and lots of fresh fruits and vegetables, they did not develop hypertension. But when they migrated to urban areas they acquired high levels of blood pressure. "Their genes do not change when they move; their diet does," says Whelton. The reason for indigenous people not developing hypertension is fairly simple: they do not eat processed food.

The real culprit behind hypertension is the liberal intake of salt that goes into processed foods. The preparation of these foods totally disrupts the balance between potassium and sodium, a 10-to-one ratio of which is what the human body is really designed for. For instance, a tomato weighing roughly 120 gm contains nine mg of salt, and approximately 120 gm of tomato ketchup contains 700 mg of salt and all the potassium leaches out of the latter. "Hypertension is not an inevitable part of aging but a disease of civilisation," declares Boyd Eaton, an Atlanta-based radiologist who has written much on nutrition and chronic illness.

Successful aging is as much a state of the mind as of the body. Solitude can claim people's lives no matter how meticulously they maintain their bodies. According to Robert Kahn, a University of Michigan psychologist who has studied the health effects of companionship, "People who manage to maintain a network of social support do best." Social contacts and associates aid in the successful management of stress, which contributes significantly to heart ailments, cancer and accidents. In addition, prodding one's mental faculties constantly seems crucial to living long. "An idle brain will deteriorate just as surely as an unused leg," notes Gene Cohen of the gerontology centre at George Washington University in Washington d c .

A growing number of people in the us are indeed living better and longer. According to Kenneth Manton, a demographer at Duke University in Durham, North Carolina, the disability rate among people above 65 has fallen steadily since the early '80s. A shrinking percentage of seniors are plagued by hypertension, arteriosclerosis and dementia.
None of this would be possible if above all, people did not have the will to live. Surveys conducted by the Washington-based Alliance for Aging Research suggest that today's 50-year-olds are keen to turn 100 and do so in good shape. "Earlier, people would say, "Who would want to be 100?" " recollects Thomas Perls of the Harvard Medical School and director of the New England Centenarian Study. "But now they are realising that it is an opportunity." They genuinely crave longer and richer lives. Centenarians are the fastest-growing segment of the us population. Even though they are still rare, their ranks have increased more than 16-fold over the past six decades -- from 3,700 in 1940 to roughly 61,000 today. The us Census Bureau projects that one in nine baby boomers (nine million of the 80 million born in the us between 1946 and 1964), will survive into their '90s and one in 26 (or three million) will hit 100.