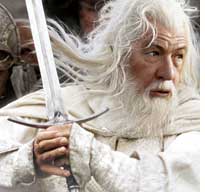 At a Tehran home, a family and its neighbours shout, "Bah bah Rakhsh", as a white steed strides into the TV frame. Iranians are watching the Hollywood version of G R Tolkien's Lord of the Rings. But for them Gandolf's--the hero-- steed is actually an avatar of Rakhsh, the mythical horse of Rostam, the great champion of the Shahnameh, the 1,000-year-old Persian epic.

Iran's state run television usually rations Hollywood films. But in the last two weeks of June there was a virtual non-stop telecast of the Lord of the Rings triology. Western observers said the telecast was to keep Iranians from venturing outdoors in the wake of the protests that have rocked the country after the results to the Presidential election were declared in mid-June. The Times quoted an official as saying "The telecast will put an end to the nightly shouts. This film will keep the people occupied."