Home alone: why Goa has the highest proportion of locked houses in India

Goa is witnessing a realty boom. People are building houses here, but they are hardly ever home. Talking to some of these owners helps us understand why 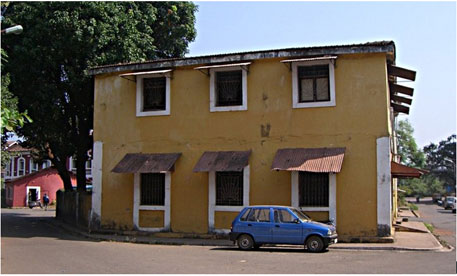 The love affair began suddenly, but it took some time for Haryana-based businessman Rajeev Deswal (name changed) to express his feelings. “The beaches were pristine, the sea was warm and the people were so nice,” he says. When he had saved enough money, he gave his love a seal of permanence and bought an apartment in Goa.

Deswal’s flat in Benaulim in south Goa is redolent of the spirit of the state—bright and breezy—but it remains locked for most part of the year. It is one of those houses which the Census of India describes as an “occupied locked house”. Goa has the highest proportion of locked houses in the country—as much as 1.4 per cent.

Other states trail far behind—Lakshadweep and Meghalaya occupy the second spot with 1.1 per cent of their houses locked. Bigger states such as Uttar Pradesh, Bihar and Rajasthan, which routinely witness migration by individuals and families to big cities in search of work, have significantly lower proportions of locked houses. On the other hand, data show that less than 0.5 per cent of houses in states such as Assam, Andhra Pradesh, Bihar, Jharkhand, Karnataka and Madhya Pradesh are locked. 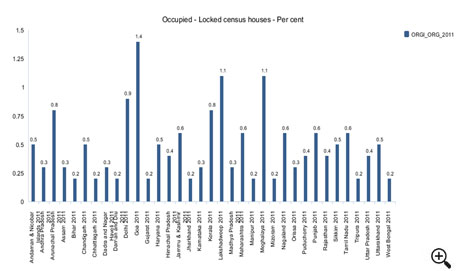 Where are Goa’s home owners?
While the Census does not investigate why these houses are locked, Madgaon-based property agent Harsha Nayak says it is the Goan appeal that makes owners build homes here even though they do not and cannot stay here full-time. “A lot of people want to retire and live here. Many of them are not exactly old but in their fifties. They want to buy and keep property here,” says Nayak, who has helped many Delhiites and Mumbaikars buy property in Goa.

There is another lot—people who just love Goa and who want to keep coming back, but don’t plan on settling down here. A flat in Goa ensures they have a place to stay and a reason to remain connected to the charming place that Goa is. “A lot of Goans work and live abroad, but they don’t want to lose their connection with their native place, so they keep their homes, and they keep these locked,” Nayak says.

A few other Census indicators offer interesting insights into the unusual interest in Goa. During the decade between Census 2001 and 2011, Goa’s houses grew by 25 per cent while Madhya Pradesh’s houses grew by 31 per cent, Rajasthan’s by 39 per cent and Bihar’s by a very substantial 43 per cent. What makes Goa stand out then?

In Uttar Pradesh and Bihar, locked houses are more abundant in relatively affluent districts which have seen the growth of the realty sector in the past decade. In Uttar Pradesh, Lucknow and Meerut top the list with 0.8 per cent houses locked, and are followed closely by Ghaziabad, Agra and Gautam Budh Nagar (where Noida and Greater Noida are located) at 7 per cent. On the other hand, the modest Sitapur distrtict has only 2 per cent of its houses locked. Similarly, 0.6 per cent of houses are locked in Bihar’s Patna while 0.1 per cent of houses are locked in Araria, which is the least of all districts. Therefore, it is not migration but affluence which seems to be the reason for so many locked homes.

Another interesting Census indicator which merits a review is the condition of houses. Census found 76 per cent of Goa’s houses in good condition, with Lakshadweep and Puducherry at 78 per cent and 75 per cent. But in states such as Uttar Pradesh (54 per cent), Bihar (36 per cent) and Odisha (29 per cent), fewer houses were categorised as “good”. Affluence and quality of houses are clearly linked to the fact that Goa’s property environment is not merely need-based, but an expression of affluence of buyers.

Arti Singh, content head with a BTL agency in Gurgaon, was on holiday in Goa when this reporter contacted her. Arti loves Goa for what it is. She visits the state once or twice a year and her family owns one of the occupied locked houses. “We love the Goan culture, and the place is of course very different from urban Gurgaon,” she says.

Builders are aware of the irresistibility of Goa’s charm and are building villas and apartments everywhere, on the hills and by the sea. A variety of options are open to buyers which include arrangements for flat-owners to rent out their properties in a profit-sharing deal with builders-managers. The next Census—even though many years away—is likely to show a continuing trend of Goa-lovers owning a piece of this paradise, even if they keep it locked for most part of the year.