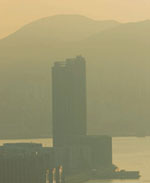 HONG KONG's deteriorating air quality is driving away foreign professionals and threatening international investment. A survey by the American Chamber of Commerce, Hong Kong, has found that almost 40 per cent of 140 executives interviewed find recruiting overseas staff tough because of the worsening air quality. Almost four in five said they either knew someone who had left the city or was planning to do so.

The overall air quality has been declining over the past six years. The roadside particulate levels in the city averaged 75 microgrammes per cubic metre (mcm). According to WHO's recent air quality guidelines, the levels of particulate matter shouldn't exceed 20 mcm. The city is nowhere near meeting them. Its air quality ranks below Los Angeles, US's most polluted city. Most of the pollution is caused by factories across the border in Guangdong. Thermal power plants and cars also pollute a lot.

Hong Kong was a preferred location for companies doing business in Asia. Now, they prefer Singapore. So, executives have to be paid more to get them to Hong Kong. A survey, conducted after a senior government adviser admitted that Hong Kong's deteriorating air quality was affecting investment decisions, found that more than half of Hong Kong's companies have been forced to improve their salary offers to bring executives to the city. Many of them are asking for higher housing allowances.