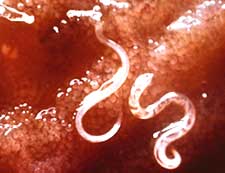 iron supplements are routinely prescribed to people infected with hookworm, an intestinal parasite that causes anaemia and protein deficiency. But a new us study says this line of treatment is unlikely to help and suggests the need to review the guideline.

Researchers from Yale University School of Medicine and University of Maryland studied the effect of diets containing either 10 parts per million (ppm) iron (iron restricted) or 200 ppm iron (standard) on hamsters. These animals were then infected with hookworm (Ancylostoma ceylanicum). The group found that infected animals fed the standard diet experienced significant delay in growth and had lower blood haemoglobin levels as compared to uninfected controls 20 days after infection. In contrast, no significant differences in weight or haemoglobin concentration were observed between infected and uninfected animals fed the iron-restricted diet. The iron-restricted animals also had reduced intestinal worm burdens on day 10 and day 20 after infection.

The group then studied the effect of a range of iron supplements -- 10 ppm, 40 ppm, 100 ppm and 200 ppm. Infected animals getting iron between 40-100 ppm showed greater weight loss and anaemia than those in the low (10 ppm) or high (200 ppm) iron diet groups. Mortality was also significantly higher in the intermediate dietary iron groups. Lead researcher Michael Cappello says the relationship of iron levels and hookworm-infection intensity resembles a bell curve: at very low and very high iron levels, the parasite doesn't do well, but it rages at intermediate levels. He suggests that high iron level may poison hookworms and low iron level prevents worms from developing into adults. The study appeared in the January issue of the journal Infection and Immunity ( Vol 74, No 1).

Hookworm infections occur mostly in tropical and subtropical climates and are estimated to affect about one fifth of the world's population.