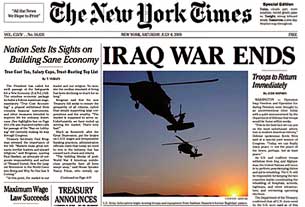 At the crack of dawn on November 12, a group of colourfully-clothed people took to the streets in Los Angeles and New York to distribute a copy of The New York Times. The paper carried an eye-catching headline: Iraq war ends. It also had a story saying all Americans were being given free healthcare. The papers were dated July 4, 2009. They were fake. A group called Yes Men, known in the us for its practical jokes, claimed responsibility for the prank. The fake paper had a motto which read 'All the news we hope to print'--a play on The New York Times ' motto, 'All the news that's fit to print'. It was accompanied by a website (www.nytimes-se.com) mimicking The New York Times' site.