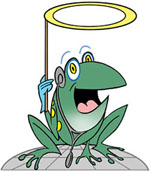 researchers in Italy have found hope in amphibians to treat hospital-acquired infections. A group of bacteria that cause the infections--most common being respiratory pneumonia, skin and urinary tract disorders--are gaining resistance to drugs, sometimes with fatal results. The study says a naturally occurring agent (antimicrobial peptide) in frogs inhibits the drug resistant bacteria.

The idea was to find out if they can be used for therapy. "Since most bacteria associated with hospital acquired infections are resistant to antibiotics, it was important to find new classes of antibiotics," said Maria Luisa Mangoni, lead author of the paper and researcher with Istituto Pasteur-Fondazione Cenci Bolognetti at Sapienza Universit di Roma, Rome, Italy.

All peptides showed antibacterial activities in neutral solutions in labs. But that doesn't qualify them for therapy in human beings because their use was found to be limited in the human serum, except one sample.

The researchers say esculentin could be used to develop compounds for treating secondary infections. The other two samples, they say, could only be used locally or spraying in the air. Skin secretions of amphibians are toxic and hence they cannot be administered systemically.

The study was published in the January issue of Antimicrobial Agents and Chemotherapy (Vol 52, No 01).