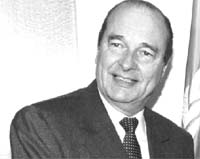 french president, Jacques Chirac has stated that his country is ready to host a global meeting of non-governmental organisations ( ngo ), for preparing the basis for a un environment conference, which is scheduled to be held in the year 2002, almost 10 years after the Rio de Janerio Earth Summit. Chirac stated that international negotiations could no longer exclude citizens. "No matter how complex they are, negotiations that set guidelines cannot remain the preserve of experts," he added. According to him, transparency, explanation and dialogue should be the features of all international treaties so that stakes involved are understood. ngo s, including trade unions, and professional organisations have to be consulted on the national level for attaining environmental sustainability, he opined.