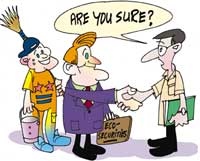 EcoSecurities, a uk -based company dealing with carbon credit projects, recently announced its plans to assist Indian project developers enter the market of clean development mechanism (cdm), a tool for the developing countries to meet their Kyoto Protocol targets. It plans to assist in areas of assessment, documentation, approval processes and monitoring, while verifying and either acquiring or transacting greenhouse gas emission reductions created by the projects. "A significant portion of us $100 million raised in 2005 by us will be invested in origination, implementation and commercialisation of carbon projects in India," said Pedro Moura Costa, the company's president.

Through cdm, developing countries can benefit from sale of carbon emission reduction (cer) units -- units bought by developed countries to meet their carbon emission reduction targets under the Kyoto Protocol. "We will engage with Indian firms for creation of carbon credits with no upfront costs, until the carbon credit is realised. We will invest in sugar, paper and pulp, nitrate-based fertilisers, cement, renewable energy, and in the bio-fuel sectors," Costa added.

Experts however, are wary of EcoSecurities's entry. "It is a commercial player, with a model to provide a one-stop shop for cdm developers. The price it pays for the cer s will be very low. EcoSecurities is unlikely to offer better prices than those already offered on the market (e.g. by government buyers). But its entry could have a positive impact on some small-scale projects that have not been able to find domestic financing," says Axel Michaelowa of the Programme International Climate Policy, Hamburg Institute of International Economics, Germany.

According to Michael K. Dorsey of Dartmouth College, usa, "As an early mover into the Indian market, EcoSecurities is well positioned to determine nature of other market makers. The firm will play a crucial role in setting norms, quite possibly to some degree commissions as well as other hallmarks of participation for carbon market players." Dorsey is also apprehensive that projects that undermine environmental quality, threaten public health or compromise other key aspects of sustainable development, generate credits in the EcoSecurities market.

Patrick Burgi of Myclimate, Zurich, differs. According to him, "The fact that EcoSecurities is expanding activities in India is a sign that the cdm market is becoming more mature. Big companies now feel confident to invest in this market, which is good for cdm. " He maintains a neutral stand saying EcoSecurities is not any better or worse than other project developers in the market. They are just service providers and will focus on projects which have the greater cost benefit ratio. The way cdm is shaped, it doesn't foster community-based project development. This is related to cdm guidelines and procedures, which are complicated, time-consuming and cost-intensive. By expanding their Indian activities, EcoSecurities will employ more Indian consultants being able to develop cdm projects in a more efficient way. This would lower the transaction costs, which might foster smaller projects as well," says Burgi.

With the entry of this new player, it still remains to be seen what is its impact on cdm in its entirety.