How to eat into the market 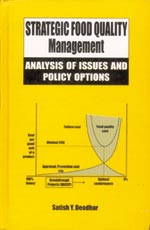 If India wants a firmer footing in the global food market, it will have to address its laws governing food quality and management practices with greater urgency. That is the thrust of Satish Deodhar's arguments in his book Strategic Food Quality Management: Analysis of Issues and Policy Options.

Indian food laws are mostly archaic and the occasional law that does appear attractive, seems so only on paper. Deodhar attributes this to the lack of coordination among the various ministries. As a remedial measure, he argues for the creation of one central food regulatory authority that will ensure formulation of more workable laws.

Deodhar begins with an analysis of Indian food laws and standards contrasting them with the regulatory mechanisms in the uk, us, and other internationally established standards.

He also argues for streamlining of the laws to avoid overlaps in product coverage. For instance, quality standards for canned fruit products are set by the fpo, the Agricultural Produce (Grading and Marketing) Act, 1937, and the Prevention of Food Adulteration Act (pfa), 1954. Moreover, under the pfa, the offence and the punishment are the same whether the adulteration is grave or minor. What is more, it specifies a list of additives that can be used in food products, thereby making the use of anything else a case of adulteration.

Deodhar points out, that in the us, only two agencies control most of the food regulations. Though the us has many laws and sub-agencies involved in implementing food regulations, there is a clear understanding about the jurisdictions and responsibilities of each.

On adapting foreign laws, Deodhar makes a strong case for making the Hazard Analysis and Critical Control Points (haccp) food safety system a norm in the domestic market. The haccp, which has its origins in the us National Aeronautical and Space Application (nasa) Center, is a system that looks out for potential risks at critical points in the production cycle and then identifies appropriate control and monitoring mechanisms to ensure safety of the product. In nasa, it was used as a way of guaranteeing the food provided to astronauts in the 1960s. Now, it is mostly used by the food industry.

In the rest of the book, Deodhar goes on to bolster his arguments through case studies analysing issues of quality control at the micro level -- the plant level and the supply chain. The concluding message remains: Take proactive steps on food quality management and regulation or face barriers in foreign markets and lose the domestic market to foreign producers.