How to increase earning from fisheries

Team from from Tripara's College of Fisheries show the way 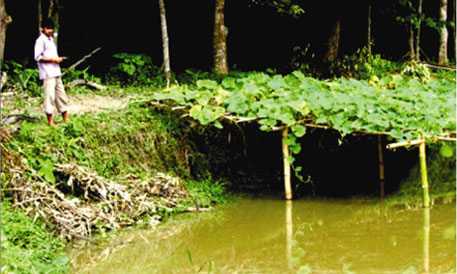 Despite being rich in biodiversity and having perfect conditions for fishery and agriculture, farmers in the Dhalai district of Tripura barely managed to eke out a living. This has changed now as a presentation made by Ratan K Saha at the Indian Science Congress shows.

Saha is the head of the department of fish health and environment at the College of Fisheries in Tripura. He and his team collected traditional knowledge on farming and fishing in the area by talking to the farmers. The team found that the community followed certain methods to increase earnings through fish-based farming system. The community followed fish-cum-vegetable (bottle gourd) culture, paddy-cum-fish culture, fish-cum-duckery and had methods to protect fish from predators.

They grew vegetables near the pond in which they grew fish. The ponds generally have a bamboo platform above them, supported by bamboo poles. The platform is locally known as Lau macha. The researchers figured out that the shade under the platform was useful to the fish, too, as they could hide under it during the sunny hours.

The bamboo poles and twigs under the pond water have helps in the growth of microorganisms, which reduced the cost of fish feed. The results are published  in the January 2013 issue of the Indian Journal of Traditional Knowledge.

Saha and his team took the work a step forward under the National Agriculture Innovation Project launched in 2007. Instead of combining just two techniques, they trained the farmers to combine as many as four techniques. For example, they combined agriculture with fishery, duck farming, rice cultivation and pig rearing. All these complemented each other.

Saha says that though the people were using these techniques, they were not aware how they were working or that if they were combined, the effect would be substantial.