How tortoises got their shells

South African researchers claim to have found out the reason 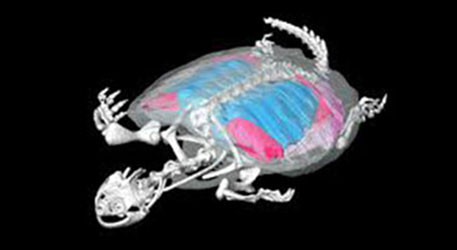 Researchers at the University of the Witwatersrand in Johannesburg, South Africa, claim to have found the reason why tortoises got their shells after careful study modern and early tortoise fossil.

The study, carried out by Tyler Lyson, professor at the University’s Evolutionary Studies Institute, says the evolution of the tortoise shell is linked to the evolutionary processes that shaped the breathing apparatus in the sea animals.

Lyson and his fellow researchers found that early in the evolution of the tortoise body plan a gradual increase in body wall rigidity produced a division of function between the ribs and abdominal respiratory muscles.

“Tortoises have a bizarre body plan and one of the more puzzling aspects to this body plan is the fact that tortoises have locked their ribs up into the iconic tortoise shell. No other animal does this and the likely reason is that ribs play such an important role in breathing in most animals including mammals, birds, crocodilians, and lizards,” Lyson was quoted as saying in a report by South African website, southafrica.info.

“As the ribs broadened and stiffened the torso, they became less effective for breathing which caused the abdominal muscles to become specialised for breathing, which in turn freed up the ribs to eventually – approximately 50-million years later – to become fully integrated into the characteristic tortoise shell,” said Lyson.

By studying the anatomy and thin sections, Lyson and his colleagues discovered that the modern tortoise breathing apparatus was already in place in the earliest fossil tortoise, an animal known as Eunotosaurus africanus.

The results of the study were presented by Lyson and his colleagues in a recent paper, titled “Origin of the unique ventilator apparatus of turtles”, published in the scientific journal, Nature Communications.