Spread of malaria depends on the direction of wind 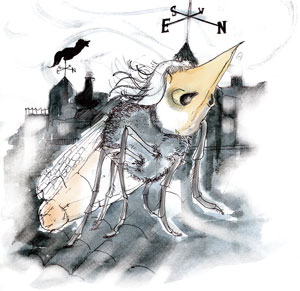 A STUDY conducted in coastal Kenya has found a fascinating link between wind direction and transmission of malaria in nearby households. Geographical features, other than distance from water bodies or potential larval sites, that lead to formation of malaria hotspots are not fully understood. This study was initiated to explore additional factors that may be significant contributors to the formation of such hotspots.

The female anopheles needs to take blood meals from human hosts to nourish her eggs and then find a suitable water body to lay them. It is during blood meal that the mosquito may acquire and consequently transmit malarial parasites. The distance between the larval site and the blood meal also has a ‘fitness cost’ (common term in evolutionary biology, where the cost in performing an activity, in terms of energy, is calculated versus the benefit to the organism) that affects the survival of mosquitoes.

For the study, the team from Imperial College and University of Oxford in the UK analysed blood samples of 642 children in Kilifi district to look for the malarial parasite Plasmodium falciparum.

As expected, the study found an inverse relation between the distance of larval sites to households and incidence of malaria. But the spatial distribution of hotspots had a loophole. The most affected households lay north of the larval sites, instead of surrounding them in all directions in a circular pattern.

This made the team believe something else was also guiding the formation of the hotspots. Female mosquitoes locate hosts by a variety of olfactory cues. For locating any source of food any animal or insect travels the direction of the smell. Since the odours can only be carried downwind, it is obvious that the source of the odour lies upwind. “I had been interested in wind because I’ve been trying to develop models of how mosquitoes search and find blood meal hosts starting from larval habitat,” says David Smith, professor at the department of epidemiology at John Hopkins School of Public Health in the US, and co-author of the study.

They found the location of the hotspots in the Kilfi District coincided with this theory, the wind direction reports, indicated the direction to be southerly about 90 per cent of the time. The hotspots were mainly found upwind (to the north) of the larval sites.

So, can the same rule be applied to other diseases spread by mosquitoes? “We still need to find out if this is a general phenomenon. It may vary between different Anopheles species and even more likely between different genera (like Aedes),” says Philip Bejon of Center for Vaccinology and Tropical diseases, University of Oxford.

The study was published in the February 14 issue of Nature Communications. Bejon adds that the study results can be used by malaria control programmes.