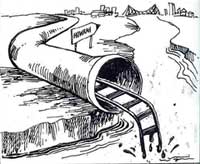 Howrah railway station is facing closure because the West Bengal Pollution Control Board (WBPCB) says a huge volume of sewage from the station is discharged untreated into the Hooghly river. WBPCB officials say they will serve notice on Indian Railways asking them to suspend station operations, exercising its power under a Supreme Court order authorising WBPCB to close down industries discharging effluents into the Hooghly. Howrah station is listed among the state's 38 "gross polluting industries".

WBPCB officials say they have received no positive response as yet from Howrah station authorities to their demand that sewage treatment plants be installed to treat the excreta discharged through the station's drains into the river. Instead, railway authorities reportedly even refused permission to WBPCB workers to collect sewage samples for laboratory testing. State environment minister Ambarish Mukherji contends Howrah station is the "most recalcitrant" of the identified polluting bodies.

The Supreme Court decision came in response to a petition by a citizen, M C Mehta, after WBPCB officials pleaded their helplessness in dealing with the Howrah station authorities. Now, a railway spokesperson says an appeal may be made to the Supreme Court seeking exemption from its order on the ground that the railways cannot be considered an industry.