Five years on, no progress on project to clean 16th century lake 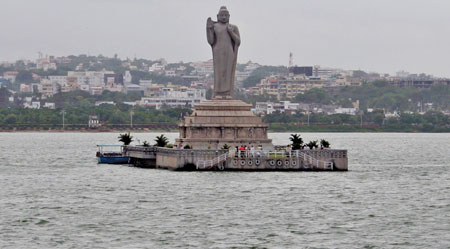 FOR the past five years Hyderabad has been trying to clean the Hussain Sagar Lake, separating the twin cities of Hyderabad and Secunderabad in Andhra Pradesh.

The efforts suffered yet another blow on June 20 when the Andhra Pradesh Pollution Control Board (APPCB) denied permission to dredge the mouths of four nalas releasing waste water into the lake and to dispose it of at a nearby quarry. It said the sediments contain hazardous chemicals.

In 2005-06, the Hyderabad Metropolitan Development Authority (HMDA) started a `310 crore project to improve the 16th century lake's water quality and sanitary conditions of the people living in its surrounding areas. The lake receives domestic sewage, industrial effluents and accumulated toxic wastes through the nalas. The Hussain Sagar Lake and Catchment Area Improvement Project (HCIP) is scheduled to be completed by 2012 or early 2013.

HMDA had proposed to dredge around one million cubic metre of sediments. It had also planned to dispose of 500,000 cubic metre of dried sediments at Jawaharnagar, where quarry pits are available for dumping and levelling of material. HMDA also proposed it would plant trees at the dump site. The site is 25 km away from the lake.

But APPCB denied the No Objection Certificate. It pointed out that Jawaharnagar could not be used for dumping because the site was operating without the Board's authorisation and was facing a notice under the Environment Protection Act. According to the analysis of the sediment samples, the concentration of TCLP (toxicity characteristic leaching procedure) cadmium exceeded the limits under the Hazardous Waste (Management & Handling) Rules, 2003. A TCLP analysis determines the presence of leachates that could percolate through landfills and react with solid wastes leading to public and environmental health risks. Japan-based Nippon Jogesuido Sekkei Company Ltd had collected the samples for APPCB.

HMDA's Metropolitan Commissioner contended this in a letter dated September 16, 2009, to the Member Secretary of APPCB. The authority stated that its analysis of sediment samples by the same Japan-based firm indicated that for all the locations the concentration of the contaminants—arsenic, chromium, mercury, cadmium and lead—was below the threshold limit of 50 mg/kg. Hence they could be categorised as non-hazardous for disposal. APPCB sources said this was because the consultants argue the overall composition of toxic substances when seen across the lake body is diluted and so safe enough for dumping.

The pollution board advised HMDA to dispose of the toxic sludge at the treatment storage and disposal facility operated by Ramky Enviro Engineers at Dundigal, 30 km from the city. Alternatively, it advised HMDA to adopt other scientifically approved modes of disposal. "We are likely to revert to APPCB. We will soon get the NOC," a senior official of HCIP said.

In September 2009, HMDA had invited tenders to finalise the company which would dredge and dispose of sediments from the lake by summer 2011. But the deadline had to be revised since none of the applicants met the authority's requirements. In the past five years, Hussain Sagar has become the focal point of civil society's activism. "I would like to see the government go beyond tokenism," said a concerned citizen.