Iconic Indian fish on the verge of extinction, says study

The Humpback Mahseer is being replaced by non-native, blue-finned outsiders, which have been artificially bred and introduced in the river 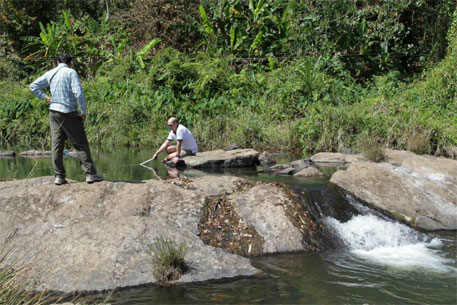 Pollution, loss of habitat, destructive fishing and sand extraction have all taken a toll on one of the most iconic and highly-prized freshwater fish found in the Cauvery river basin in Karnataka. All these factors restrict the ability of the fish to migrate to their spawning grounds.

The giant Humpback Mahseer is on the verge of extinction, according to a study conducted by researchers from the UK-based Bournemouth University and St Albert’s College in Kochi, Kerala.

In the paper, published in the journal, Endangered Species Research, the authors have pointed out a sharp decline in the fish population.

The Western Ghats region is famous for freshwater biodiversity. Mahseer, belonging to the genus Tor, is considered a prized sports fish of great cultural value.

In the Cauvery, the Mahseer community comprises two varieties—a “blue-finned” fish and an “orange-finned, hump-backed” one.

While it is not clear whether these are distinct species or two different phenotypes (observable physical or biochemical characteristics of an organism), evidence suggests that the humpbacked fish is endemic to the river whereas the blue-finned variety was introduced from Maharashtra in the 1980s, the study says.

The research paper shows that the endemic Humpback Mahseer is on the brink of extinction having been replaced by non-native, blue-finned outsiders, which have been artificially bred and introduced in the river in the name of conservation.

Freshwater ecosystems and their biodiversity are the most endangered and poorly-protected resources on Earth. Of the 5,785 species of freshwater fish assessed for their conservation status by the International Union for Conservation of Nature (IUCN), more than 36 per cent are threatened and over 60 species have become extinct since 1500 AD, the study says.

The research suggests that the introduction of the non-native, blue-finned Mahseer has had a catastrophic effect on the numbers of endemic Mahseer in the Cauvery.

In the Western Ghats, approximately half of the region’s endemic fish species are threatened, according to Adrian C Pinder and Rajeev Raghavan, the study authors.

The study area on the Cauvery was the Galibore Fishing Camp, one of the four former angling camps situated on the river, encompassed by the Cauvery Wildlife Sanctuary. The scientists compared angling data collected from 1998 to 2012.

“… I started to look for alternative data sources and discovered that the Galibore Fishing Camp had kept detailed angler catch records. This not only allowed us to analyse the temporal trends in population size over the previous 15 years, but also form a detailed understanding of how the type and species of Mahseer had changed over time,” Pinder said in a Bournemouth University website release. 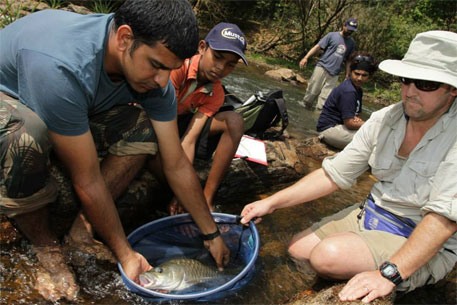 The angler catch data revealed some distinct patterns in the composition of the Mahseer catches over time, with a significantly increasing catch rate of the blue-finned variety and a significant decline in catch rates of the orange-finned type, the study shows.

The study also says that the blue-finned Mahseer has become abundant in the river in the past two years. “Without a doubt, their success has been at the expense of the Humpback Mahseer that historically occurred throughout the entire river catchment,” Pinder said.

Conservationists had introduced the blue-finned variety to conserve the native Mahseer species, but it backfired, the authors said.

Till 1993, the orange-finned Mahseer variety was the only phenotype captured by anglers in the Cauvery. The appearance of the blue-finned phenotype is likely to relate to fish movements and hatchery-reared fish that were initiated in the 1970s, the study says.

According to the authors, there is an immediate need to establish the status of the Humpback Mahseer throughout the Cauvery basin and acquire genetic material to secure the true taxonomic identity of this fish as a precursor to exploring potential species survival planning.

“The state of confusion surrounding Mahseer taxonomy means the Humpback Mahseer currently lacks a valid scientific name and could potentially go extinct before being named,” one of the authors said.

In 2012, Pinder and Raghavan set up the Mahseer Trust, an NGO working to protect Mahseer and its habitats. The trust now works with national and international stakeholders to educate and promote better-informed fisheries management practices to save the Humpback Mahseer from extinction.

“My current priority is on sourcing specimens of the endemic Humpback Mahseer. If we are not already too late, obtaining DNA from this animal will allow us to name the fish and, based on our data, get it classified as ‘critically endangered’ on the IUCN Red List,” Pinder added.

The Humpback Mahseer is only found in the Cauvery basin.