If the earthquake wasn't enough 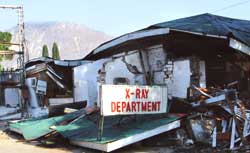 survivors of the October 8, 2005, earthquake in Pakistan-administered Kashmir and northern areas of Pakistan risk deadly diseases such as hiv / aids, hepatitis B, cerebral malaria and syphilis. Chances of unscreened blood transfusions are rife. Farhana Memon, program manager and secretary, Sindh Blood Transfusion Authority (sbta) said, "There are about 3,000 blood banks in Pakistan but most of them are unregistered and lack a pathologist. There are also no by-laws for safe blood transfusion."

"The blood supply in Pakistan is 1.5 million units per annum against an annual demand of 4.5 million units. The earthquake has increased this demand," said Tahir S Shamsi, consultant haematologist and transplant physician at Bismillah Taqi Hospital, Karachi. He was speaking from earthquake-affected area where scores of physicians and surgeons are involved in relief work.

"We have sent screening kits to teams in Karachi but need refrigerated vans which are only available with Hussaini Blood Bank and Red Crescent Society," Memon said. Blood transfusion ethics demand that blood be properly screened and stored at 5 c.

Altaf Nazim, chief of (hbb), Karachi, said about 1000-1500 blood bags have been dispatched to earthquake-affected areas, courtesy sbta. Also rapid screening process was being used to monitor blood quality but he added that the method was inefficient. So though thousands of people have responded to appeals for blood donation, it's not certain if these donations would help.

The Sindh Transfusion of Safe Blood Act enacted in 1997, remained dormant till 2003 when the sbta was established and given powers to register blood banks and seal the illegal ones. With a small staff of 10 people and only four doctors, the authority sealed 104 unsafe blood banks within a few months and forced others to register. But many illegal blood banks have re-opened as they have influential patrons.

The situation has worsened since the earthquake due to lack of a good disaster management plan. Memon felt they "needed a back up system in blood banks" and registered donors of blood rather than emergency donors.

Muneeb-ur-Rehman, chairperson Ruit-e-Hilal Committee and a top religious scholar of the Brelvi sect, said, "Donating blood is in accordance with the teachings of Islam. Maulvi s are called rigid, but we have submitted a draft ordinance to the ministry of law justifying kidney donation. However, we are yet to receive a response from them."