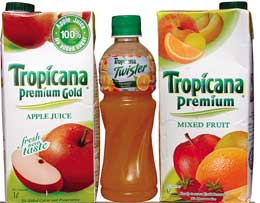 the Indian Medical Association (ima) will now endorse PepsiCos Tropicana fruit juices and its breakfast cereal Quaker Oatsthe first time in the world that a medical association will endorse a food product. Terming it a partnership for health, the associations secretary-general, S N Misra, said although the company had not paid money for the endorsement, PepsiCo may sponsor the associations conferences and meetings for three years, the agreement period. Media reports said the company paid the association Rs 50,00,000 for the deal. Public interest groups say the move may set a trend in endorsing such products, which is illegal and unethical.

ima is clear about why it chose to endorse the products. We endorsed PepsiCo because they approached us. Everyone is welcome.We will endorse after assessing whether the product is safe, Misra told Down To Earth (dte). The associations endorsement committee analyzed information given by the company and decided to partner with it after finding the product healthy, he added. ima has earlier endorsed products such as Dettol soap and the domestic disinfectant Lizol.

The move has been severely criticized. The ima has become a money-making body that is selling the image of doctors. They should be encouraging people to eat fresh fruits and vegetables instead of lending their weight to commercial products, says C R Soman, director of Health Action by People, an ngo in Thiruvananthapuram. Soman has worked on unethical marketing practises of the food industry in India. If ima wanted to endorse fruit juices, they should have given a blanket endorsement to all fruit juices and not just to one company, he adds. Suspicious of the deal, he says sponsorships involve huge amounts of money and there is little accountability of how the money is spent.

The deal makes business sense for the PepsiCo. In 2007, non-carbonated drinks contributed to 69 per cent of PepsiCo Beverages North Americas revenues.


The endorsement means the company gets to use the associations name in advertisements and labels on the packs. The Prevention of Food Adulteration Act, 1954, does not provide for such labels. Section 39 of the act lays down that the label of any package containing food for sale should not have the words recommended by the medical profession on it. The package should also not have words which imply or suggest that the food is recommended, prescribed, or approved by medical practitioners or for medical purpose.

Also, the Medical Council of Indias Code of Ethics Regulations, 2002, says that a physician shall not give to any person, whether for compensation or otherwise, any approval, recommendation, endorsement, certificatewith respectcommercial product with respectfor use in connection with his name, signature, or photograph in any form or manner of advertising through any mode. ima officials claim that they have got lawyers to look into the legal aspect before the agreement was arrived at. An official, on the condition of anonymity, said they had endorsed the constituents and not the product and if the constituents changed, the certification would be scrapped. The company, however, declined to comment to dte.

Such endorsements have triggered controversies earlier. In 2002, the Federation of Family Physicians Associations of India endorsed Coco Colas bottled-water brand Kinley but it was discontinued after objections. In 1997, the American Medical Association endorsed Sunbeam products. The contract was cancelled after public outcry and the associations president was asked to resign.


PepsiCo says its products are healthy. The company believes that endorsement from the third party, ima, lends further credibility to the products. Studies have showed that intake of 0.3 litres of juice per day results in short height and obesity in children below the age of five, and juices have more calories and less fibre as compared to fruits. According to B Sesikeran, director of the National Institute of Nutrition, Hyderabad, Packaged fruit juices do not have the same ingredients as natural fruits as they are lost during processing.

So, the next time one of the 175,000 ima doctors advertise the products, you know what to look out for.